Ahead of Diwali, the air quality in the national capital has taken a turn for the worse.


New Delhi: Ahead of Diwali, the air quality in the national capital has taken a turn for the worse.

People in Delhi and its nearby areas Gurugram, Noida, Faridabad and Ghaziabad woke up on Wednesday to a thick blanket of smog covering the region as the AQI plunged to the "very poor" category. It is believed that the crop residue burning in the nearby states of Punjab and Haryana are contributing to polluting the air. At around 8:30 am, the overall AQI in Delhi docked up at 309. 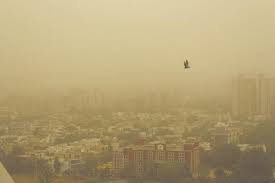 From October 15, stringent measures to combat the menace of air pollution has come into force in the national capital and its nearby regions as part of the Graded Response Action Plan. This plan which was first implemented in Delhi and NCR in 2017 include increasing bus and metro services, hiking parking fees and stopping the use of diesel generator when the air quality turns poor.

Other major cities such as Kolkata, Mumbai, and Chennai, as compared to Delhi, have had much better air quality.(ANI)