As winters continue to shiver Delhi, a dense fog engulfed the national capital with the minimum temperature dropping to 4.1 degrees Celsius, on Tuesday.

New Delhi: As winters continue to shiver Delhi, a dense fog engulfed the national capital with the minimum temperature dropping to 4.1 degrees Celsius, on Tuesday.

According to the report published by the Regional Meteorological Centre, New Delhi, "mainly clear sky and cold day conditions" are likely to prevail at a few places here. The maximum temperature is expected to touch 20 degree Celsius and the minimum temperature recorded this morning was 4.1 degree Celsius.

The India Meteorological Department (IMD) said that fall in minimum temperatures by three to five degree Celsius is expected over most parts of northwest India during the next four days.

"No significant change in minimum temperatures over most parts of Central and East India during next 2-3 days and fall by 2-4°C thereafter," the IMD stated.

Deepika, a woman cyclist at Sarai Kale Khan said that since she prefers to follow a healthy lifestyle and hence was out despite the harsh cold conditions outside. 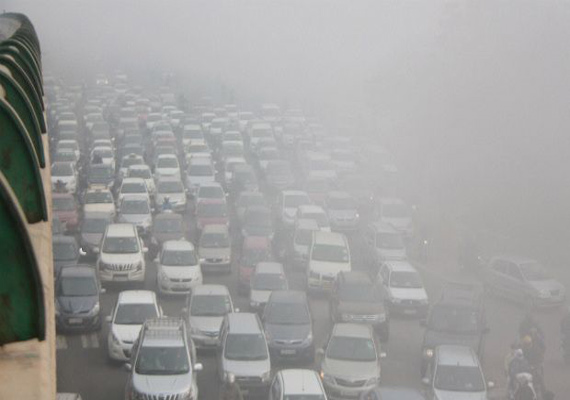 "Not only pollution but Covid-19 has also forced many cyclists to stay at home. However, I prefer to follow a healthy lifestyle and hence prefer to cycle even during harsh winters. My kids and elderly people at home prefer to stay at home as they face breathing problems," she told ANI.

Ritika, a local, said that the pollution is not only dangerous for humans but for animals as well. "Heavy fog, air pollution, and Covid-19 pandemic is dangerous not only for me but also for my pet animals. I take adequate precautions and prefer to go out for morning walks," she added.