District Congress Committees in UP dissolved ahead of bye-election

All the District Congress Committees in Uttar Pradesh was dissolved on Monday following the party's debacle in the Lok Sabha elections and constituted a three-member discliplinary committee to go into complaints of "gross indispline" during the polls.


New Delhi: All the District Congress Committees in Uttar Pradesh was dissolved on Monday following the party's debacle in the Lok Sabha elections and constituted a three-member discliplinary committee to go into complaints of "gross indispline" during the polls.

The decision by the All India Congress Committee (AICC) came after the proposals were submitted by general secretaries' in-charge of Uttar Pradesh East Priyanka Gandhi Vadra and West, Jyotiraditya Scindia, respectively.

All Uttar Pradesh district committees of Congress to be dissolved.Two member committee formed for each seat going in for by-poll.Ajay Kumar Lallu appointed incharge of organization reshuffle

"The Congress has also deputed a two-member team to oversee election preparations and management of all Vidhan Sabha seats of UP East and West where by-elections are taking place," an AICC press release said on Monday.  In the reconstitution, Priyanka has representation  youth upto 50 per cent.  She has also directed that there should also be equal participation of Dalit and Other Backward Classes (OBCs).

The release said the party has also constituted a three-member Disciplinary Committee to examine complaints of "gross indiscipline" during the recently held Lok Sabha elections in which the Congress faced a humiliating defeat. The committee comprises Anugrah Narayan Sinha, Vinod Chowdhary and Ramji Avan.

Significantly, at a meeting of workers in Rae Bareli, Sonia Gandhi's constituency, Priyanka had lashed out at party workers saying they were negligent in campaigning and she was fully aware of their non-functioning. 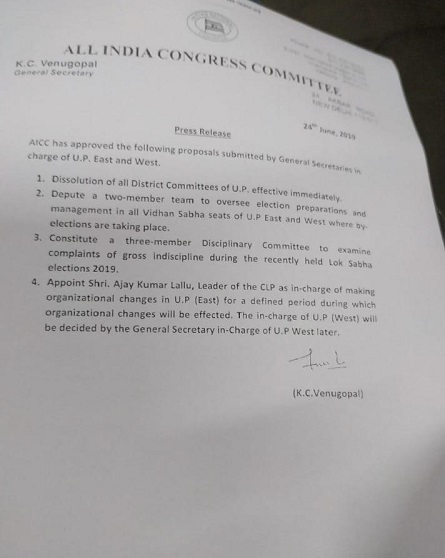 Preparing for the upcoming bye-elections in the state, Priyanka met workers and leaders from June 9 onwards. So far, she has met all the candidates, district presidents and coordinators from the party. Till date, a total of 965 workers and leaders have met her.(ANI)