The filmmaker Zoya Akhtar on Saturday released the first teaser of her upcoming movie 'The Archies’ on social media. Watch the full teaser on Dynamite News:

Taking the Instagram, Zoya posted the teaser and wrote: Get ready to take a trip down memory lane 'cause The Archies is coming soon only on Netflix. 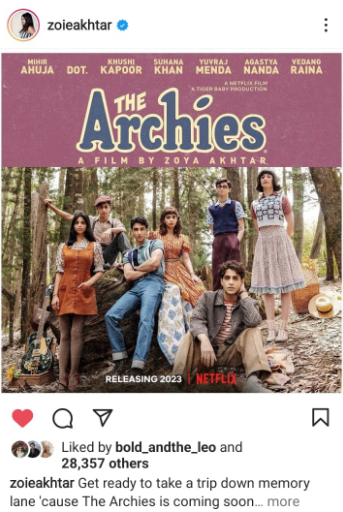 In the video, apart from star kids, Mihir Ahuja, Dot, Vedang Raina and Yuvraj Menda having fun in the woods.

Archie Andrews and his squad including Veronica, Betty, Jughead and Reggie, have been immortalised by several adaptions of films and cartoon series. The character Archie Andrews first appeared in the Pep Comics and gained insane popularity as a standalone character in the pop culture. It will be exciting to watch the Indian version of the The Archies.

According to the sources, Agastya will eassy the role of Archie Andrews, while Khushi and Suhana will be seen as Betty and Veronica.

The film can be seen in an Indian film version on the OTT platform on 18 April 2023.

Netflix's 'Ghost Stories' to debut on midnight of January 1, 2020