The agitation spread to many places in other states also including Uttar Pradesh, Haryana and Telangana. Full story on Dynamite News: 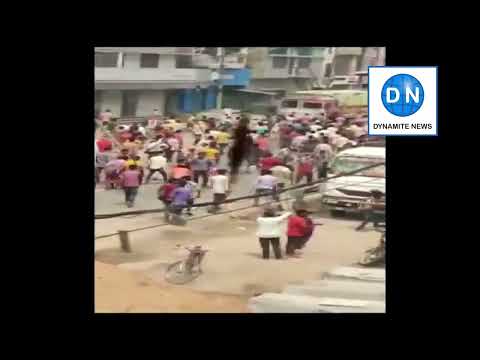 Patna: The agitation against the Agnipath scheme, to recruit youth to the armed forces initially for four years, turned violent as it continued for a third straight day in many states including Bihar. The protesters allegedly attacked the houses of Bihar Deputy Chief Minister Renu Devi and State BJP president and West Champaran MP Sanjay Jaiswal.

Jaiswal said that he was at his ancestral residence when the incident took place.

"Not much damage to the property has been done," he said.

Meanwhile, Renu Devi's son told "Our residence in Bettiah was attacked. We suffered a lot of damage. She (Renu Devi) is in Patna."

The agitation spread to many places in other states including Uttar Pradesh, Haryana and Telangana.

Today, railway traffic was blocked and train coaches were set ablaze in several states such as Bihar, Uttar Pradesh, Haryana and Telangana. Meanwhile, anticipating violence in the state, the Haryana government has suspended internet services in Ballabgarh.

In Telangana, several people were injured, after Telangana police allegedly opened fire on a mob at Secunderabad railway station as protests escalated into large-scale violence and arson.

Congress leaders Rahul Gandhi and Priyanka Gandhi Vadra today slammed the Centre over the Agnipath scheme. Rahul Gandhi tweeted that Prime Minister Narendra Modi does not understand what the country wants, listing out initiatives by the central government that were "rejected" by the people.

"He can't hear anything except the voice of his 'friends'," Rahul said.

Gujarat a state for all Indians: CM Vijay Rupani