Pakistan on Wednesday arrested the mastermind behind the 2008 Mumbai terror attacks, Hafiz Saeed, whose prosecution has long been sought by New Delhi and Washington over the ghastly attacks in India 's financial capital.


Washington DC : Pakistan on Wednesday arrested the mastermind behind the 2008 Mumbai terror  attacks, Hafiz Saeed, whose prosecution has long been sought by New Delhi and Washington over the ghastly attacks in India 's financial capital. In Washington, US President Donald Trump welcomed the arrest. In a tweet on Wednesday morning, Trump wrote, "After a 10-year search, the so-called 'mastermind' of the Mumbai terror  attacks has been arrested in Pakistan. Great pressure has been exerted over the last two years to find him!"

After a ten year search, the so-called “mastermind” of the Mumbai Terror attacks has been arrested in Pakistan. Great pressure has been exerted over the last two years to find him!

The US State Department also welcomed the arrest saying, "The arrest of LeT leader is a positive step. A full and expeditious prosecution for his involvement in numerous acts of , such as the Mumbai attacks that killed 166 people, including six Americans is necessary. The victims of the  attacks deserve justice. Contrary to Trump's characterisation of a prolonged 'search',authorities have been aware of Saeed's whereabouts for years, critics have argued.

Analysts in Washington see the detention as major cosmetic move ahead of Pakistan Prime Minister Imran Khan maiden official visit to the United States and said, "clearly, much is being done to put a happy face on Imran Khan  visit to Washington DC. I think the arrest of Hafiz Saeed is purely cosmetic because there is no historical basis to conclude otherwise. Washington probably believes as I do, but places other issues like Pakistan's potential positive role in the Afghan peace process as a higher priority, an assumption that, in my opinion, is mistaken," said Lawrence Sellin, a retired US Army Reserve colonel, Iraq, and an Afghanistan veteran. 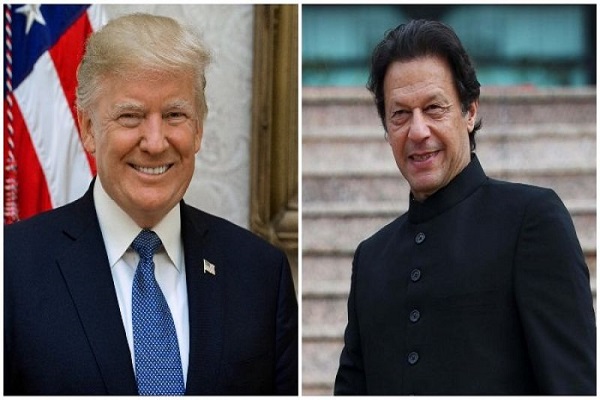 Trump's South Asia policy was seen as radical two years ago for its tough stance on Pakistan, but with Imran Khan's visit to Washington from July 21 to 23, the policy seems to have made a sudden U-turn on some key aspects.

The changed South Asia policy" of the Trump administration now has a welcoming bouquet of positives for Pakistan. Some of the positives that moved within weeks before the big Trump-Khan meet - Hafiz Saeed's arrest, a four-party joint statement on Afghan peace process being released, the Balochistan Liberation Army (BLA) being suddenly designated a organisation and the International Monetary Fund (IMF) loan for USD 6 billion being approved.

"I think this arrest should be seen in the same context as a number of other recent notable developments: Pakistan calling for India to resume dialogue, Pakistan arresting dozens of militants, and even Pakistan  announcing it would be gifting a portrait of Donald Trump  to the US President," said Michael Kugelman, deputy director of the Asia Program at the US-based Wilson's Center.

Pakistan is leading a charm offensive in advance of Khan's visit to the US, in the hope that US officials will be receptive to a number of Pakistan pitches and asks," he said.Pakistan faces the threat of international financial sanctions over lax controls on financial close that could go toterrorists. Islamabad needs to show action in the next few weeks to prevent itself from being blacklisted that would restrict its access to the international banking system.Pulitzer Prize-winner journalist and former New York Times reporter Pir Zubair Shah told ANI about Pakistan facing its worst economic crisis. The news of Hafiz Saeed's arrest is clearly an effort by Pakistan to show to the US that it is now serious in combating terror(ANI)