The much awaited movie latest teaser poster unveiled by the Sultan of bollywood.

New Delhi: Nation is celebrating Diwali, and here is a Diwali gift for Bhaijan fans the First look of “Tiger Zinda Hai”. 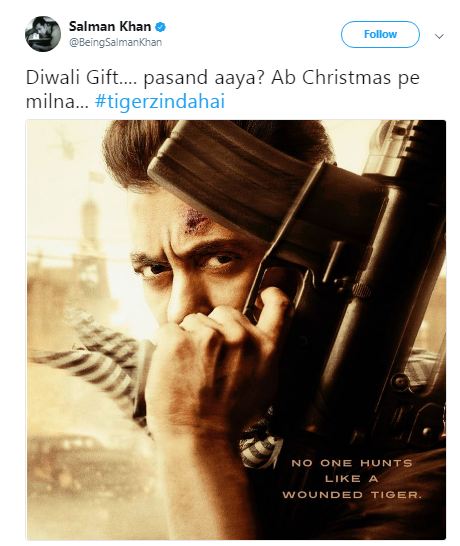 The tagline of the poster reads, "No One Hunts Like A Wounded Tiger."

This movie is directed by Ali Abbas Zafar which is a sequel of “Ek Tha Tiger”. And this time it would be expected to have some breath-taking action scenes.

Instead of that, people are very much keen to see Salman and Katrina together on big screen again after a very long time. Salman and Ali had earlier collaborated for Sultan, one of the highest-grossing Bollywood movies ever.

This is when `Tiger Zinda Hai`s trailer comes out!