Highlights of Rahul Gandhi's press conference on the issue of inflation 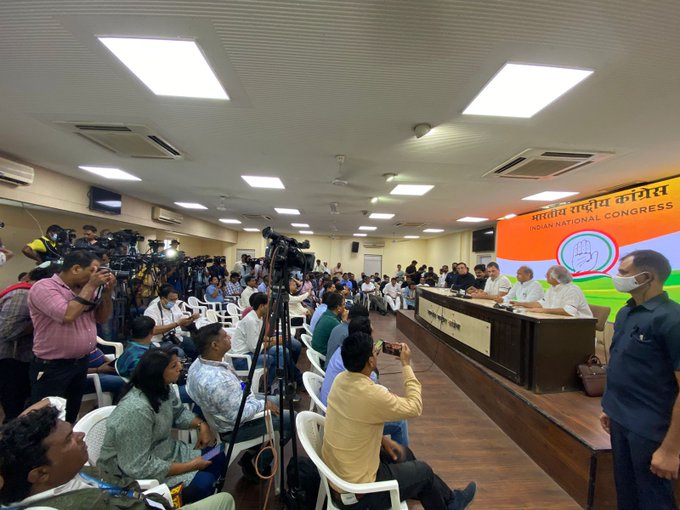 Here are the highlights:

1. We're witnessing the death of democracy. What India has built brick by brick, starting almost a century ago, is being destroyed in front of your eyes

2. Anybody who stands against this idea of onset of dictatorship is viciously attacked, jailed, arrested and beaten up

3. Idea is, people's issues -whether price rise, unemployment, violence in society - must not be raised.

Today there is no democracy in India, there is dictatorship of four people: Congress leader Rahul Gandhi@RahulGandhi @INCIndia #Congress #RahulGandhi pic.twitter.com/VOoXj5aADY

5. Today there is no democracy in India, there is dictatorship of four people.

6. What India has built brick by brick a century ago is being destroyed now?

7. Anybody speaking against this govt is viciously attacked, put in jail.

Question all you want. There is absolutely nothing there, everybody knows it. My job is to resist the idea of the RSS and I am going to do it. The more I do it, the more I will be attacked, the harder I will be attacked. I am happy, attack me: Rahul Gandhi@RahulGandhi @INCIndia pic.twitter.com/8x3eQUhMTj

8. People's issues are not being allowed to be raised

9. There is absolutely nothing there, everybody knows it.

11. Give me the entire system, then I will show you how elections are won

What India has built brick by brick a century ago is being destroyed now: Rahul Gandhi@RahulGandhi @INCIndia #Congress #RahulGandhi pic.twitter.com/fdQlEOXfxG

12. I don't think the Finance Minister has any understanding of what is going on in the economy of India, zero understanding.

13. I think the macroeconomic fundamentals that she is talking about is something else.