Finally the trailer of the much-awaited 'Housefull 4' is out and going by it, it looks the film is going to be a fun riot with its reincarnation comedy.


Mumbai: Finally the trailer of the much-awaited 'Housefull 4' is out and going by it, it looks the film is going to be a fun riot with its reincarnation comedy.

The trailer opens with a fictitious place called Sitamgarh. Set in 1419, the grandeur of the sets will surely leave you impressed.

The trailer showcases two timelines of 1419 and 2019 running parallel to each other. Akshay and Bobby are warriors in 1419, while Riteish is a dance teacher by the name Bhangdu Maharaj. On the other hand, the three leading ladies Pooja, Kriti, and Kriti Kharbanda are pretty princesses whose father Ranjeet organises a 'Swayamvar' for his daughters in order to find the right groom for them.

The trailer is packed with the usual 'Housefull' kind of jokes. For example, in one of the scenes Riteish who is a dancer tells Pooja, "Phulo phalo, phulo phalo, arre kone mein toh chalo!" which will bring back the memories of the earlier installments of the franchise.

Rana Dagubati will be seen playing the antagonist for the first time in the installment. His rustic, rugged look adds the right bit of intrigue in an otherwise fun trailer.

Later, In 2019, the characters set out to undercover the truth about their past, while engaging in usual peculiar humour and random sword-fights with each other.

Johnny Lever will be seen recreating charm again with his one-liners and situational comedy which will surely keep you glued to your seats. Apart from him, the trailer also shows a glimpse of Nawazuddin Siddiqui who will be exploring the comedy genre for the first time. The ace actor is seen imitating his own character from the film 'Kick' with the same laugh and dialogue delivery.

The trailer also gives a glimpse of Chunky Pandey who has always remained a vital part of the 'Housefull' installment, leaving an impact in between scenes with his perfect comic timing.

On Wednesday, Akshay unveiled the character posters from the film. The posters show the characters in elaborate old-world costumes as well as in modern setting. The two posters featuring Akshay show him portraying dual roles of Rajkumar Bala and Harry in the film. The first poster shows Akshay in an intriguing warrior avatar, wielding a bow and arrow. 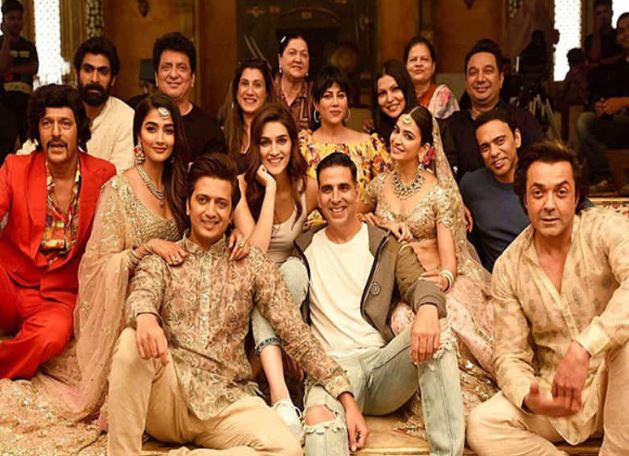 The next posters shared by Akshay feature Riteish Deshmukh as Bangdu and Roy.

Riteish seems to be playing the role of a dancer. The posters show Riteish with long hair, striking a dance pose in one and interacting with his new-age counterpart in another.

The third set of posters introduce Bobby Deol as Dharamputra and Max. The posters show Bobby as an armoured warrior, wielding a sword, with an intense look on his face. His present-day avatar is called Max.

In the first poster, Kriti can be seen in a regal avatar, dressed up in a fancy lehenga and ornate jewellery. Her modern-day avatar looks a lot like her usual self.

Sporting a lehenga, traditional jewellery, and a veil, Kriti looks beautiful as Rajkumari Madhu. In the second poster she can be seen rocking the modern look carrying a denim jacket on her shoulder.

Revolving around the theme of reincarnation, the film follows a non-linear narrative. It is slated to hit the big screens on Diwali and clash with Taapsee Pannu and Bhumi Pednekar-starrer 'Saand Ki Aankh' and Rajkummar Rao-starrer 'Made in China'. (ANI)

Shikhar Dhawan's mimicking act of Akshay Kumar's character from 'Housefull 4' will leave you in splits!