Bollywood actor Kangana Ranaut on Saturday voiced her support to the new Agnipath scheme for recruitment into the Armed forces.

Mumbai: Bollywood actor Kangana Ranaut on Saturday voiced her support to the new Agnipath scheme for recruitment into the Armed forces and she "appreciated the government for taking these initiatives".

The 'Dhaakad' actor posted a story on her Instagram account today and wrote: "Many nations like Israel have made army training compulsory for all their youth, few years everyone gives to the army to learn life values like discipline, nationalism and what it means to guard your country's borders, #agneepathscheme has deeper meanings than just getting building careers, employment or making money..." 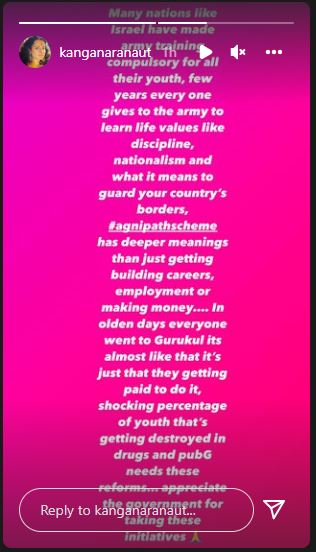 Kangana, who has been vocal a supporter of the BJP-led central government, compared the newly launched Agnipath scheme to that of the selection process of the traditional Gurukul systems.

"In olden days everyone went to Gurukul its almost like that it's just that they getting paid to do it, shocking percentage of youth that's getting destroyed in drugs and PUBg needs these reforms...appreciate the government for taking these initiatives," Kangana added.

On June 14, the Centre introduced the new Agnipath scheme for recruitment into the three branches of the armed forces, on a short term basis. Raging protests were seen across the country against the scheme with Indian Army aspirants been protesting in several states against the scheme which proposed hiring personnel for a four-year period in the armed forces, followed by mandatory retirement for at least 75 per cent of them without any pension benefits.

Meanwhile, on the work front, Kangana Ranaut will be next seen in 'Tejas', where she portrays the role of an Indian Airforce Officer. The film will release later this year. (ANI)

Bollywood showers love on Bhumi Pednekar as she turns 32