Actors Katrina Kaif, Ishaan Khatter and Siddhant Chaturvedi on Monday announced that they are all set to team up for an upcoming horror-comedy film 'Phone Booth'.


New Delhi: Actors Katrina Kaif, Ishaan Khatter and Siddhant Chaturvedi on Monday announced that they are all set to team up for an upcoming horror-comedy film 'Phone Booth'.

The trio took to Instagram to share the first look of the film with their fans and announced that the film will release in 2021. 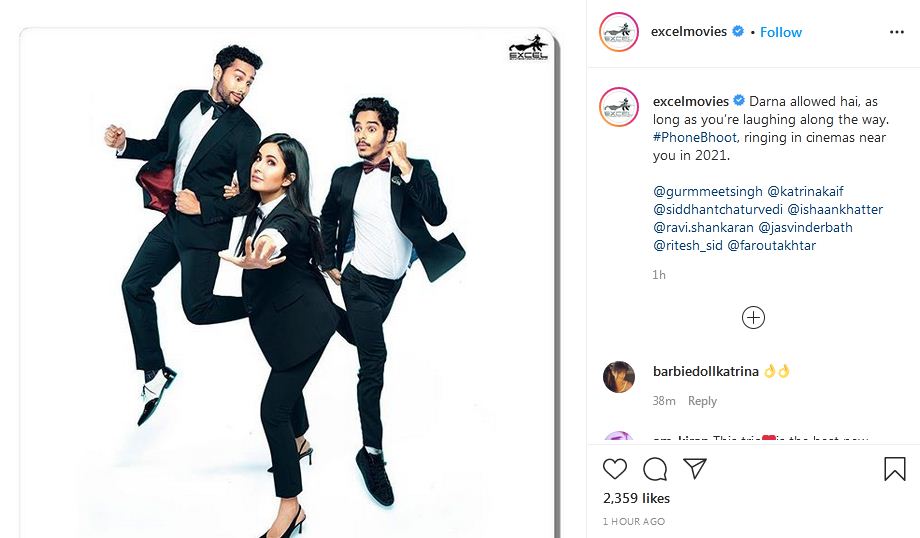 In the picture, Katrina, Siddhant and Ishaan were seen dressed in black coloured suits with white coloured shirts underneath them.

"The one-stop-shop for all bhoot related problems, #PhoneBhoot ringing in cinemas in 2021," Katrina wrote in the caption.

While Ishaan, on the other hand, revealed in his caption that the first look of the cast of the film has been "locked" since March due to the COVID-19-induced lockdown and shutdown of the entertainment industry.

Film critic and trade analyst Taran Adarsh further revealed that the film will be directed by Gurmmeet Singh and bankrolled by Ritesh Sidhwani and Farhan Akhtar.

"IT'S OFFICIAL... #KatrinaKaif, #SiddhantChaturvedi and #IshaanKhatter to head the cast of #PhoneBhoot, a horror-comedy... Directed by Gurmmeet Singh... Produced by Ritesh Sidhwani and Farhan Akhtar... Filming will begin later this year... 2021 release," tweeted Adarsh.

The horror-comedy that hosts the trio of Katrina, Siddhant and Ishaan for the first time will go on the floors later this year. (ANI)

Bollywood Masala: 'Nepotism is just the tip of the iceberg', says Abhay Deol