As per her latest Instagram photos, Katrina has been sporting the hair style for her upcoming film ‘Bharat’.

New Delhi: Bollywood diva Katrina Kaif has been flaunting her curly hair for a while now and she did just the same on the cover of a fashion magazine.
As per her latest Instagram photos, Katrina has been sporting the hair style for her upcoming film ‘Bharat’.

The 35-year-old, who has turned cover girl for the December issue of Vogue magazine, looks ravishing in a Versace dress and belt. The broad belt with a statement golden buckle accentuates the actor’s waist, and so does the tube-dress which opens into a flowy multi-coloured side slit skirt at the bottom. She has been styled by popular Bollywood stylist and Fashion Director for Vogue India, Anaita Shroff Adajania.

According to Vogue, the ‘Thugs of Hindostan’ star ‘lets down her guard’ in the publication’s last issue for this year. The official account of the magazine shared the cover, writing, “Get ready for the party season with none other than Katrina Kaif on the cover of our December 2018 issue.” 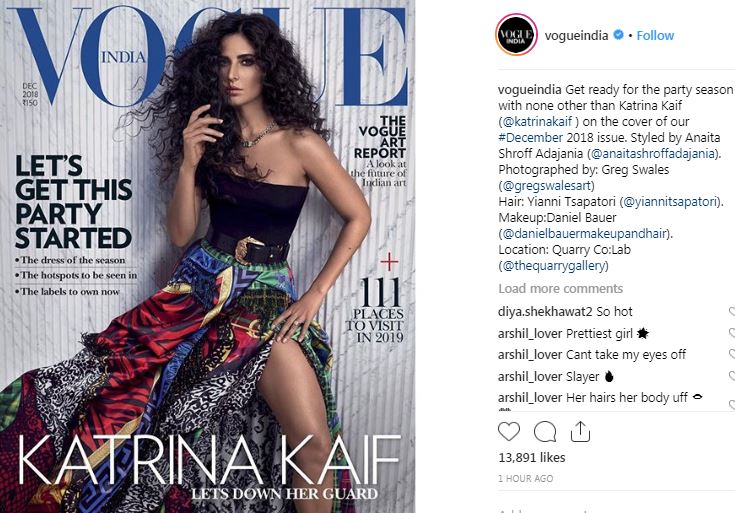 On the work front, the actor is currently shooting for Ali Abbas Zafar’s ‘Bharat’, which also stars Salman Khan. This year, she will be seen in Aanand L Rai’s much-anticipated film ‘Zero’. Starring Shah Rukh Khan and Anushka Sharma, the flick is slated to release on December 21. (ANI)