New Zealand choked yet again as India defeated the hosts in a second successive Super Over in the fourth T20I of the five-match series here at the Westpac Stadium on Friday.

Wellington: New Zealand choked yet again as India defeated the hosts in a second successive Super Over in the fourth T20I of the five-match series here at the Westpac Stadium on Friday.

With this win, India has gained a 4-0 lead in the five-match series.

In the Super Over, New Zealand managed to score 13/1 and India chased down the total easily as KL Rahul and Virat Kohli achieved the score in just five balls.

Chasing 166, New Zealand lost its first wicket with just 22 runs on the board as Jasprit Bumrah dismissed Martin Guptill (4) in the fourth over of the innings.

Colin Munro and Tim Seifert then retrieved the innings for New Zealand as the duo put on 74 runs for the second wicket. India finally got the breakthrough of Munro (64) in the 12th over as he was sent back to the pavilion via a run-out.

Immediately after Tom Bruce (0) was bowled by Yuzvendra Chahal, reducing Kiwis to 97/3. However, Seifert and Ross Taylor staged a comeback to put Kiwis in a comfortable position.

The duo put on a stand of 62 runs, but with seven runs required off the final, Taylor (24) was dismissed by Shardul Thakur. The final over saw plenty of drama as KL Rahul ran out Seifert (57) and Kiwis required three runs from three balls to win the match.

Thakur kept on leading India's fightback as he went on to dismiss Daryl Mitchell (4) and Kiwis required two runs off the final delivery of the match. The match went into the super over as India managed to run-out Mitchell Santner (2).

In the end, Kiwis got over the line by five wickets and with balls to spare. 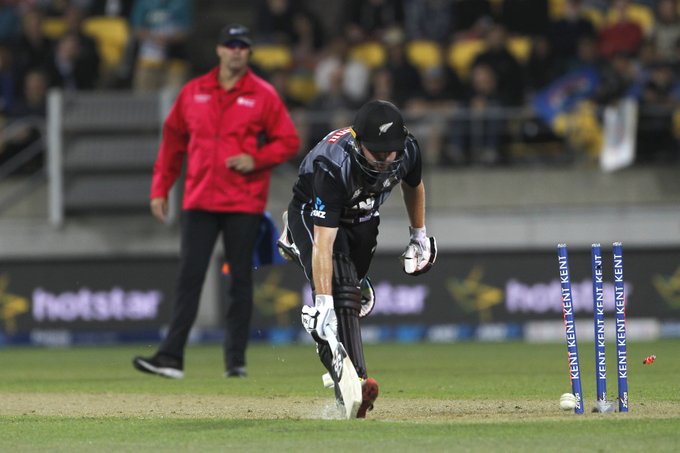 After being put in to bat, Sanju Samson failed to impress as he managed to score just eight runs and was dismissed in the second over of the innings.

Skipper Virat Kohli then joined KL Rahul at the crease and the duo formed a 34-run stand, but Kohli's (11) stint at the crease was cut short as Hamish Bennett sent him back to the pavilion as Mitchell Santner took a brilliant catch.

In-form batter Shreyas Iyer (1) departed early and India was left in a spot of bother at 52/3 in the seventh over. Rahul and Shivam Dube then put on 23 runs for the fourth wicket.

With India looking to stage a comeback, Kiwis got the big breakthrough of Rahul (39) in the ninth over as Ish Sodhi had him caught at mid-wicket. India then lost wickets of Shivam Dube (12) and Washington Sundar (0), to leave the side reeling at 88/6.

Manish Pandey and Shardul Thakur then retrieved the innings for the Men in Blue as the duo put on 43 runs for the seventh wicket. However, Kiwis dismissed Thakur (20) in the 17th over, reducing India to 131/7.