Priyanka Chopra Jonas and Nick Jonas have been giving some serious couple goals for a long time now. Recalling the memorable time spent with his beloved one year ago, the American pop singer shared a picture with his wife.

Washington D.C: Priyanka Chopra Jonas and Nick Jonas have been giving some serious couple goals for a long time now. Recalling the memorable time spent with his beloved one year ago, the American pop singer shared a picture with his wife.

Also Read: Nick Jonas: Hope I can continue to be a good partner to Priyanka

According to E-News, the 26-year-old Jonas Brothers singer penned a sweet message on his Instagram for the 36-year-old actor, whom he married last December.

"One year ago today I went to go see Beauty and the Beast at the Hollywood bowl with a group of friends. One of those friends was the woman that would become my best friend, my confidant, my muse, my beautiful wife. I am so grateful for our journey together so far. You make me smile every day and you inspire me to be the best version of myself. I am honoured to be your husband. I love you. @Priyanka Chopra," he wrote.

The newly married couple can be seen adorning the picture with their beautiful bond which is making the fans go "wow". It seems that the couple is spreading love and magic in the air with their chemistry.

In the picture, PeeCee looks like a dream as she wore a gorgeous Georges Hobeika Couture. Minimalistic make-up and beautiful Chopard diamonds completed Priyanka's look. Looking dapper in all white, Nick opted for a classic tux with a bow tie and black shoes.

Soon after Nick posted the picture, PeeCee was quick enough to express her sentiments over the time the duo has spent together. The flattered wife replied to the post and wrote, "The most amazing thing that ever happened to me is you. I love you babe."

To make the anniversary more special, Jonas even got Priyanka tickets for Mariah Carey concert happening in London, about which she posted on Instagram.

"The best husband ever.. A #lambily member's dream came true...Even though he was busy and we were apart, he made sure I celebrated our one year anniversary w my fave!" she wrote. "The incomparable Mariah Carey, Mimi -- you were amazing! So lovely meeting you and thank you for the incredible show .. you will always be my baby Nick Jonas Happy one year love!" 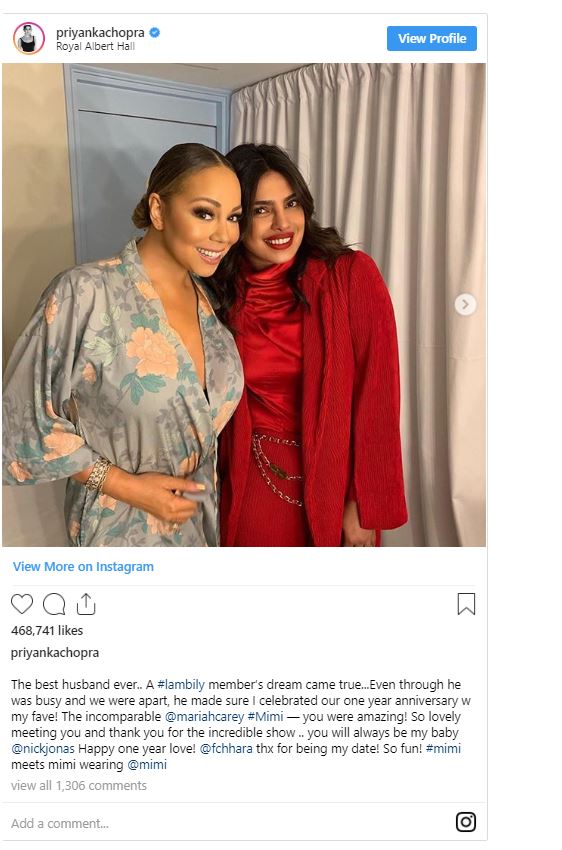 The actor took her friend Fazeela as her date to the Carey concert.

Jonas and Chopra had sparked romance rumours when they posed for photos together in Ralph Lauren designs at the 2017 Met Gala. The two returned to the annual fashion event earlier this month as a married couple.

On Dec. 1, the couple tied the knot at the Umaid Bhawan Palace in Jodhpur. Since then their love has only grown stronger as evidenced by Nick's sweet one year dating anniversary message.(ANI)