The fierce fighter and wife of Bollywood actor Ayushmann Khurrana, Tahira is a cancer survivor who has time and again raised her voice to create awareness, embracing her flaws as well as encouraging everyone to do the same.

Whilst creating awareness for breast cancer, she recited her journey fighting the deadly disease and encouraged women to embrace themselves with their scars as the badges of honour.

Tahira took to Instagram on Thursday and shared a video reciting her journey fighting through the battle of scars and emerging as a precedent for many others. 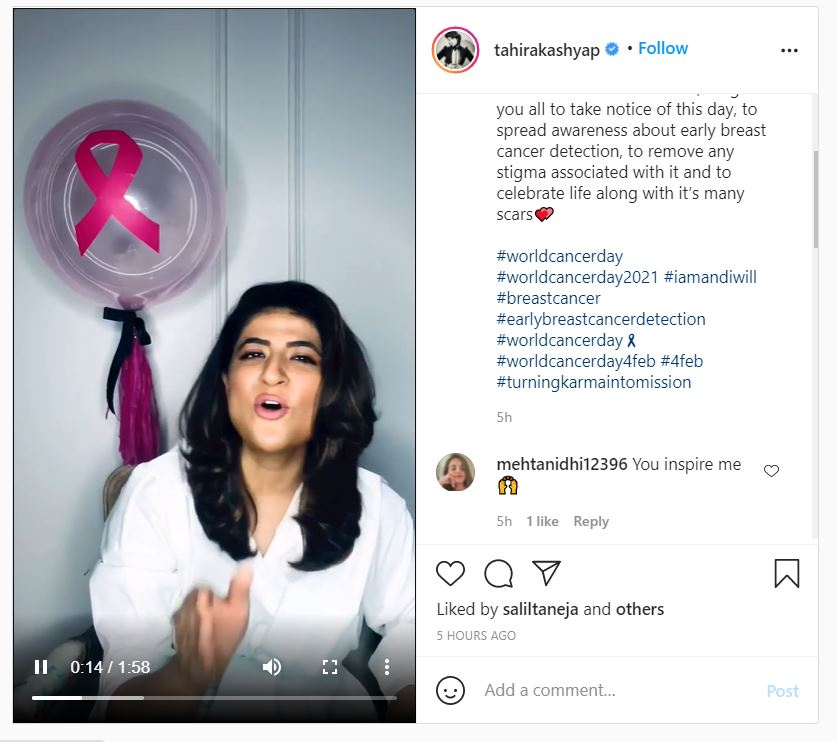 She said, "Some scars are deep, some within.

Some are seen, while some are hidden.

The thing about scars is, it reminds you of the past,

The moments of suffering that you thought would forever last.

But there's more these goddamn scars,

It's the truth which you don't see with your naked eye.

Oblivious to the functioning of the world, a blatant lie.

But hear me, there's more to the scar,

It also talks about the fight, the resilience and your invincible power.

My love and respect to those who fought,

The treacherous battlefield that some crossed, while some got lost.

But the thing with the health karma is that everyone is a winner,

For it's the fight that counts, whether you're an expert or a beginner.

The fight with cancer is not just physical but also mental,

Some battles are more tough to conquer especially if they're internal.

But hear me again, we all have that fighter which has the universe's might.

The indomitable spirit that can't be crushed by any fright.

Hide not your scars my love, show them, flaunt them, just like your bright smile, soothing to other eyes.

And when you do that time and again giving people nowhere to run and hide,

They will have to fall in love with your badge of honour, your prize.

So hear me one last time, fall in love with yourself, all with dusks, scars and cry,

That's what makes you you.

Faulty, imperfect, blemished, but all true.

Commit yourself to spreading awareness about early breast cancer detection,

Along with the video, she wrote the caption "This is something I had experienced and written about and still mean every word of it! Joining this year's theme of I AM AND I WILL, I urge you all to take notice of this day, to spread awareness about early breast cancer detection, to remove any stigma associated with it and to celebrate life along with it's many scars"

Back in 2018, Tahira was diagnosed with Stage 1a Breast Cancer. The valiant warrior has been vocal about her disease proving to be an inspiration to many others who are suffering silently.

Tahira is a best-selling author, a columnist, a film director and also a cancer survivor. She is a source of inspiration and is a celebrated icon for women's empowerment. Recently, Tahira joined hands with Ekta Kapoor and Guneet Monga to commence a cinema collective- Indian Women Rising, providing a platform to promote and accentuate content created by Indian female filmmakers across the globe. (ANI)

Will treat Varun like a newcomer on Arun Khetrpal biopic: Sriram Raghavan

Balaji plans movie on 'The Milk Man of India'