Prime Minister Narendra Modi on Sunday spoke about initiating a 'Bharat Ki Laxmi' campaign to honour the girls who have brought a change in society.

New Delhi: Prime Minister Narendra Modi on Sunday spoke about initiating a 'Bharat Ki Laxmi' campaign to honour the girls who have brought a change in society.

Addressing the citizen of the country during 57th episode of 'Mann ki Baat', Modi announced starting this campaign during Diwali and called on citizens to outline the achievements of 'daughters' of the country using BharatKiLaxmi hashtag.

This Diwali, let us celebrate #BharatKiLakshmi.

Let us celebrate the skills and strengths of our Nari Shakti. pic.twitter.com/A8lVKLSscf

"There must be numerous daughters amongst us who, through their perseverance, diligence and talent have brought glory to their families, society and the country. This Diwali, can we arrange programmes to honour the Laxmi of India?" Modi said.

"This time, let us do campaign #Bharatkilaxmi. Encouraging the Laxmi of Bharat amounts to strengthening the paths of prosperity for the country and her citizens," he added.

The Prime Minister also said that while in Diwali every household welcomes Goddess Laxmi, the time was now ripe to honour the daughters of the nation, and also implored people to make it a social media campaign along the lines of #selfiewithdaughter. 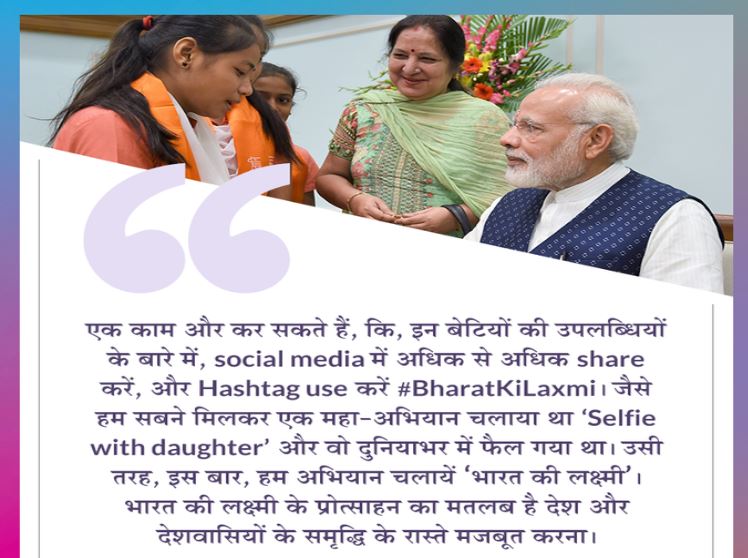 "My dear brothers and sisters, Laxmi, the goddess of wealth, makes an entry into each and every household in the form of fortune and prosperity during Diwali... We could do something more, we could highlight the achievements of India's daughters by sharing their achievements on social media, using the hashtag #Bharatkilaxmi. The way we jointly ran a mega campaign "#Selfiwithdaughter", which spread globally," he said.

Earlier, during his address, the Prime Minister had also urged people to share the surplus goods, sweets and anything which they no longer needed with the deprived section of the society so that every family in the country gets to enjoy the festive season.

"My dear countrymen, with the advent of Navaratri today, the air is bound to be full of new hopes, new energy and new resolves, once again. After all, it's the festival season. During festivals, families come together. Homes will be filled with joy! But... you must have felt this... there are many people around us who remain deprived of these celebrations," Modi said.

This festive season, have you thought about delivery in and delivery out?

PM @narendramodi talks about this idea during #MannKiBaat as a means to spread joy. pic.twitter.com/ZK5zkjXJqX

"On one hand, when we experience the 'Delivery In' of sweets, and gifts let us think for a moment on the process of 'Delivery Out'. At least in our homes, items that are in excess and thus, not required anymore, could be allocated for 'Delivery Out'," he added. (ANI)