India appreciated the United States designation of the Hizb-ul-Mujahideen leader Syed Salahuddinas a Specially Designated Global Terrorist as evidence of the commitment of the United States to end terror in all its forms...


Washington DC: India appreciated the United States designation of the Hizb-ul-Mujahideen leader Syed Salahuddinas a Specially Designated Global Terrorist as evidence of the commitment of the United States to end terror in all its forms, a joint statement issued by Indian Prime Minister Narendra Modi and U.S. President Donald, following delegation-level talks, said.

The leaders committed to strengthen cooperation against terrorist threats from groups including Al-Qa'ida, ISIS, Jaish-e-Mohammad, Lashkar-e-Tayyiba, D-Company, and their affiliates. They resolved that India and the United States will fight together against this grave challenge to humanity.

In this spirit, the leaders welcomed a new consultation mechanism on domestic and international terrorist designations listing proposals, the statement added.

They welcomed commencement of the exchange of information on known and suspected terrorists for travel screening.

They further resolved to strengthen information exchange on plans, movements and linkages of terrorist groups and their leaders, as well as on raising and moving of funds by terrorist groups.

"The leaders also affirmed their support for a U.N. Comprehensive Convention on International Terrorism that will advance and strengthen the framework for global cooperation and reinforce the message that no cause or grievance justifies terrorism," the statement said.

They also pledged to work together to prevent proliferation of weapons of mass destruction and their delivery systems and to deny access to such weapons by terrorists and non-state actors.

Meanwhile, the Ministry of External Affairs (MEA) said that terrorism and counter-terrorism ruled the discussions between Prime Minister Modi and Trump even as they called on Pakistan to ensure that its territory is not used to launch terror attacks on other countries. 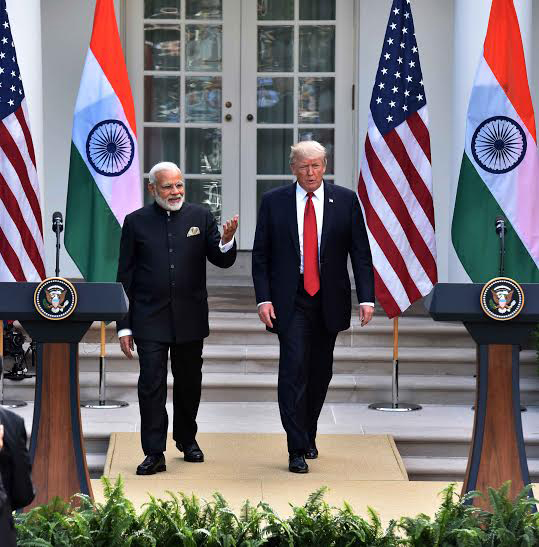 Prime Minister Modi and Trump, who met on Monday at the White House to discuss the bilateral relations between the two nations, further asked Islamabad to expeditiously bring to justice the perpetrators of the 26/11 Mumbai blasts, and other cross-border attacks.

"Both leaders called upon Pakistan to ensure its territory is not used to launch terror attacks on other countries. They further called on Islamabad to expeditiously bring to justice the perpetrators of 26/11 Mumbai blasts, Pathankot incident and other cross-border attacks," Indian Foreign Secretary Dr. S. Jaishankar said.

"The other issue was the military part and it was broadly and extensively discussed alongwith Pakistan. There are a number of countries that are saying that their terrorism concerns also originate form the same source, and that is Pakistan. It's the right time to fix responsibility and highlight the core problem," he added.

Jaishankar further said that there was a great deal of ease between Prime Minister Modi and Trump, adding that the discussions between the two leaders were related to strategic issues, policy discussions and how India and the U.S. are going to mutually support each other in a changing world. He added that the two leaders spoke highly of each other's countries.

"Prime Minister Modi and Trump discussed wide ranging issues - from defence and security, and connectivity to regional issues like Afghanistan, the Indian Ocean, East Asia and the middle-east, the NSG and the UNSC. The talks were also focussed on tax, innovation, entrepreneurship and, specifically, on digital partnerhsip," he said.

Earlier, in their joint press statement at the White House, Trump stressed on eliminating and destroying radical Islamic terrorism and emphasised on how both nations - the U.S. and India - are deeply affected by the malaise of terrorism.

"Both nations have been struck by the evils of terrorism and are determined to destroy it, especially the radical Islamic terrorism. We will be enhancing the military cooperation and next month, will join the Japan Navy to take part in the largest Maritime exercise in the vast Indian Ocean. I appreciate India's efforts in Afghanistan," Trump said.

Trump said it was an honour to have invited and hosted Prime Minister Modi at the White House.

"The relationship between the U.S. and India has never looked brighter. It's a great honour to welcome the leader of the world's largest democracy to the White House. I have always admired India and its people and the rich cultural heritage and traditions. This summer India will celebrate the 70th anniversary of their Independence and on behalf of the U.S., I want to congratulate the Indians on this magnificent milestone," he said.

Prime Minister Modi laid special emphasis on the growing camaraderie between India and the United States even as he addressed the media jointly with U.S. President Donald Trump at the White House here on Monday.

Praising the U.S. as a valued partner in India's flagship programmes, Prime Minister Modi asserted that eliminating safe havens of terror and bring stability to Afghanistan was the major priority of both nations.

Further citing that India's interest lies in a strong America, Prime Minister Modi said, "My visit and our talks will mark a very important page in the history of cooperation and collaboration between the two nations. My vision of 'New India' and President Trump's vision of 'Make America Great Again' shows convergence of ideas that will open up new avenues for people of both countries."

Prime Minister Modi, prior to this, sat down for delegation-level talks with Trump in the Cabinet Room at the White House. 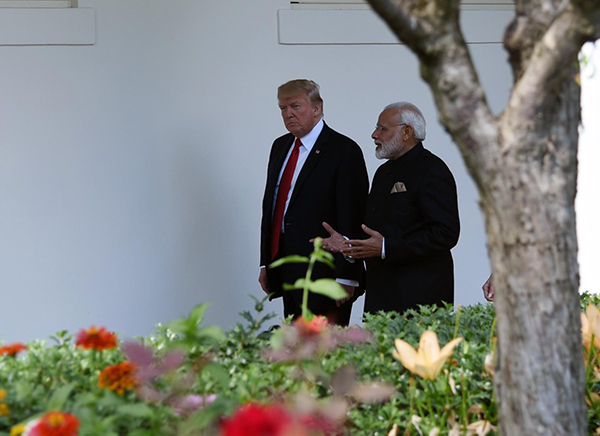 During the delegation-level meeting, the two leaders touched upon various topics ranging from purchase of military equipment to the bilateral relations between the two nations.

Trump struck upon the topic of purchase of military equipment, in reference to the recent F16 joint production deal.

"Thank you for ordering equipment from the U.S.. No one makes military equipment like the U.S.," he said.

Trump extended a warm welcome to Prime Minister Modi even as he, along with First Lady Melania, received him at the White House earlier in the day. 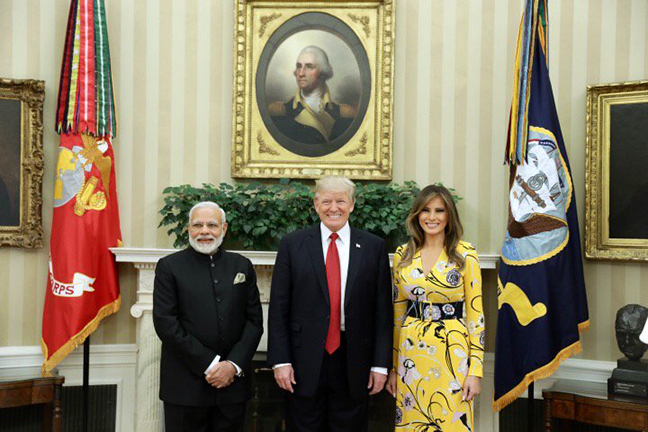 Heaping praises on Prime Minister Modi, Trump said that he had been reading a lot about him and that he would want to congratulate him for the exemplary leadership he has shown, primarily, economically.

Prime Minister Modi, while thanking Trump for the warm welcome rendered to him, said the kind of welcome he was given, it was a welcome to the 125 crore people of India. (ANI)