In a scathing attack, Congress leader Rahul Gandhi on Thursday lashed out at Prime Minister Narendra Modi, saying the latter wants to create an India that is "scared" where people are "weak and divided".

Rajmahal: In a scathing attack, Congress leader Rahul Gandhi on Thursday lashed out at Prime Minister Narendra Modi, saying the latter wants to create an India that is "scared" where people are "weak and divided".

"Narendra Modi wants an India that is scared. He wants the people of India to be weak and divided. He has become the Prime Minister only by dividing people on the basis of religion, caste, and region," he said at a public rally here.

Attacking the BJP-led Centre over inflation, Gandhi said that Prime Minister is in "some other world" when the common people are suffering due to price rise.

"Everyone knows that inflation is rising. Maybe the Prime Minister does not know. He is in some other world. Farmers, labourers, shopkeepers and youth are unhappy. But Adani is quite happy as Narendra Modi gives money to 15-20 industrialists of India. This money belongs to the people of India. It belongs to Jharkhand," he asserted.

Criticising demonetisation, the former Congress president alleged that the Prime Minister "snatched" money from the pockets of the commoners and gave it to the "industrialists".

"During demonetisation, the common people were busy in bank queues and these big industrialists were turning their black money to white money.  Narendra Modi gave them a chance to do this," Gandhi said.

He also said that Modi had opposed the land acquisition bill in the Parliament. 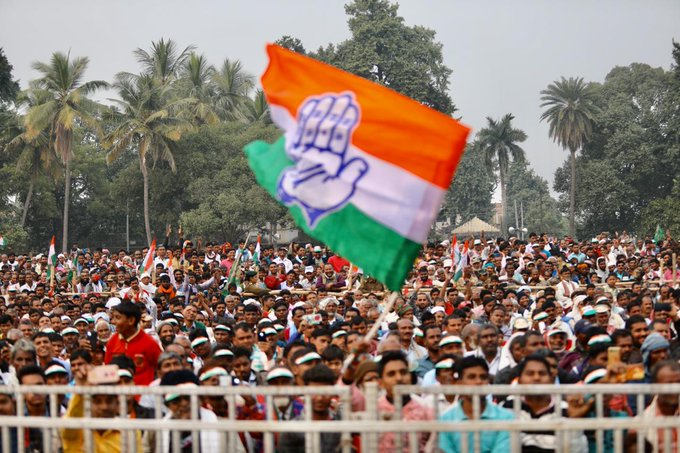 "We brought the land acquisition bill. It clearly states that without asking the tribals, farmers, poor, their land will not be taken. Their land will be compensated at a rate that is four times the market price. But Narendra Modi opposed it," Gandhi added.

Reiterating the farm loan waiver promise, Gandhi said that the same will be extended if the party comes to power in Jharkhand.

"The loan of the farmers of Jharkhand will be waived as soon as our coalition is formed and I do not lie. I do what I say. You should ask farmers in Rajasthan, Chhattisgarh and Madhya Pradesh," he further said.

Meanwhile, the third phase of state Assembly elections is underway in 17 out of the total 81 constituencies of the state. Congress, Rashtriya Janata Dal (RJD) and the Jharkhand Mukti Morcha (JMM) have entered into a coalition to defeat the BJP, which is seeking to return to power under incumbent Chief Minister Raghubar Das. The first phase of the election in the state took place on November 30 while the second round was held on December 7.

K'tka voted for stability, poll results a message for all states where anyone betrays public mandate: PM Modi