Addressing a 'Kisan panchayat' in Bijnor in the state, she asked farmers if their income was getting doubled as had been promised by the BJP-led government.

"Did your income double? Did they increase the price of sugarcane from 2017? You should know that Rs 10,000 crore is due to the sugarcane farmers of Uttar Pradesh. This outstanding amount is Rs 15,000 crore across the nation," she said

The rally was held amid ongoing farmers' protest against the three new agriculture laws.

She targeted Prime Minister Narendra Modi over outstanding dues to sugarcane farmers and said that sometimes thinks about why the Modi government had been elected twice. 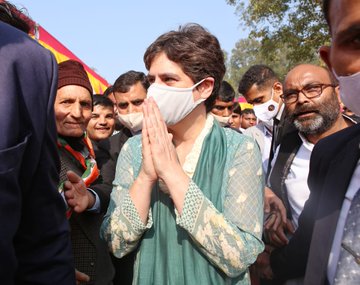 "They (people) might have done it as they had hopes and trust that he would work for them. A lot was said during the first election. He also spoke of farmers and unemployment in the second election, but nothing happened," she said.

The Congress leader said farmers, who have been protesting on Delhi borders for over 80 days in the cold, are now bracing themselves for the summer.

"What are they sitting for? Prime Minister says the laws are for the benefit of the farmers. When farmers themselves are saying that they do not want them, then why these are not being withdrawn?" she asked.

The Congress leader will also address Kisan panchayats in Mathura on February 19 and in Muzaffarnagar on February 20.

Priyanka Gandhi had visited Saharanpur on February 10 to attend Kisan Mahapanchayat and had alleged that the new farm laws "are designed to help billionaires".

Farmers are protesting on different borders of the national capital since November 26 last year against the new farm laws - Farmers' Produce Trade and Commerce (Promotion and Facilitation) Act, 2020; the Farmers Empowerment and Protection) Agreement on Price Assurance and farm Services Act 2020 and the Essential Commodities (Amendment) Act, 2020. (ANI)

Congress has lies in its DNA, says Yogi Adityanath

UP: Priyanka hits out at BJP over farmer's death in Budaun prison