Congress leader Rahul Gandhi shared his recent interaction with migrant labourers in Delhi's Sukdev Vihar on his YouTube channel from 9 am on Saturday. 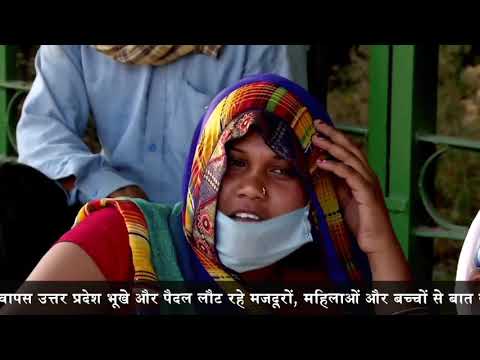 Playing now on my YouTube channel, https://t.co/4WBysS69uG, a conversation with India’s unsung heroes, our migrant brothers & sisters who have suffered tremendous hardship, violence & injustice in these past weeks.

Taking to Twitter, Gandhi said that he recently met a group of migrants walking hundreds of km from their worksite in Haryana to their village near Jhansi, Uttar Pradesh. Thus, he will share their incredible story of grit, determination and survival on his YouTube channel.

Later Congress party shared a few pictures of the Gandhi scion while interacting with labourers.

"The pain of the people can only be understood by leaders who care. Here are a few glimpses of Rahul Gandhi interacting with migrant labourers in Delhi," the Congress had tweeted.

"I am travelling from Haryana, have to go to Jhansi," Monu, a worker, told ANI.

Another labourer said Rahul Gandhi came and met them half an hour back. "He booked the vehicle for us and said he will drop us to our homes. He gave us food, water and mask," said Devendra. On May 14, Gandhi had said that his party will raise voices of migrant labourers and ensure that they get help as their livelihood was adversely impacted due to coronavirus-induced lockdown.

He posted a heart-wrenching video of labourers on Twitter with a song in the background, urging the government to help them to reach their native places.

"Darkness is deep and it is a tough time. Have patience we will stand in their security. We will keep raising their voice and will ensure they get every possible help. They are not ordinary people but they are the flag of the country's self-respect. We will never let it bow down," the Congress leader tweeted along with the video.

As the first phase of lockdown was enforced from March 25, hundreds of migrants labourers, who used to do daily wage jobs in cities started to march towards their native places on foot as public transport was suspended. Presently, Indian Railways is running Shramik special trains in coordination with states to transport migrant workers, pilgrims, tourists, students and other persons stranded at different places to their native places. (ANI)