Rajnath: Naxalism on its last leg in the country

Union Home Minister Rajnath Singh today said the "serious" challenge of Naxalism in the country has entered its "last leg" and Maoists are now resorting to coward ambushes against security forces as they are unable to undertake a direct fight.


Gurgaon: Union Home Minister Rajnath Singh today said the "serious" challenge of Naxalism in the country has entered its "last leg" and Maoists are now resorting to coward ambushes against security forces as they are unable to undertake a direct fight.

Addressing troops of the country's lead anti-Naxal operations force CRPF on the occasion of their 79th Raising Day, the home minister said due to operational efforts of these forces incidents of Left Wing Extremism (LWE) have "drastically" come down in the recent past and the casualty rate of extremists has gone up.

The demoralised Naxal cadres are now not able to undertake a fight head on with security forces and hence with their limited capabilities are now resorting to coward ambushes and attacks, he said while addressing the men and officers of the force.

The minister, during his speech, paid tributes to the 9 men of the force who were killed in a Naxal ambush in Chhattisgarh's Sukma early this month after a deadly explosive was clandestinely triggered by ultras underneath a mine protected vehicle.

"Maoism has become a serious challenge...but because of the gallant and determined action of the CRPF and other forces, these incidents have come down drastically. 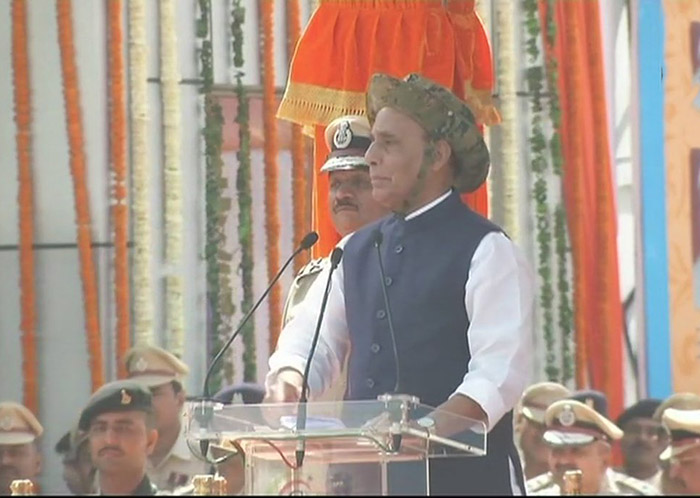 "Earlier, the casualty amongst security forces personnel and civilians was higher but now it is the reverse and the casualty rate of the Maoist cadres is higher," Singh said at the parade ground of the CRPF officers academy here in Kadarpur.

"I can say that the LWE problem in the country has entered its last leg and the people very well understand that Naxlas are anti-poor, anti-tribal and anti-development," the top boss of the country's internal security establishment said referring to killing of CRPF men during road construction work in LWE affected areas.

He asked the CRPF personnel to continue rendering their "multi-dimenisonal" role in various theatres like insurgency in the Kashmir valley and the north east as also against the LWE menace.

"You have always given a muh tod jawab (befitting reply) to these activities," Singh said.

The minister lauded the gallantry of the troops of the country's largest paramilitary force as he underlined that the CRPF men and women did not "lose their patience" during the deteriorating security situation in the Kashmir valley.

He praised the courage of CRPF Commandant Chetan Cheeta who was part of the anniversary parade.

Cheeta took nine bullets during an operation in Kashmir valley last year and displayed rare grit and brilliance during recuperation and he also joined duty few days back at the force headquarters in Delhi.

Singh said security forces like the CRPF need to ensure that no obstacle comes in the way of India becoming an economic super power.

Talking about ensuring better facilities to jawans of the force and for those of other Central Armed Police Forces (CAPFs), the minister said infrastructure to have more residential facilities will be enhanced in the future.

He said facilities of air courier (dedicated flights for transport of troops to forward areas) and e-ticketing of railway tickets has been started for CAPF personnel recently.

The home minister asked the force to create awareness about goverment-run schemes amongst "peace loving" people in troubled areas so that these citizens can have an increased trust on their country and the government.

The over 3.18-lakh personnel strong CRPF was raised in 1939 under the British rule and is celebrating its 79th Raising Day today.

The anniversary was to be celebrated on March 19 when country's first Home Minister Sardar Vallabh Bhai Patel presented colours to it in 1950 but the event was organised today owing to Singh's busy schedule.(PTI)