RIP Sharad Yadav: To Know His Perspective On Socialist Politics, Watch This Exclusive Interview Of Sharad Yadav, Taken 10 Years Ago

Senior Indian political figure and former National President of Janata Dal (United), Sharad Yadav passed away at 75. Here is an exclusive interview of this doyen of socialism, taken 10 years ago. Watch on ... 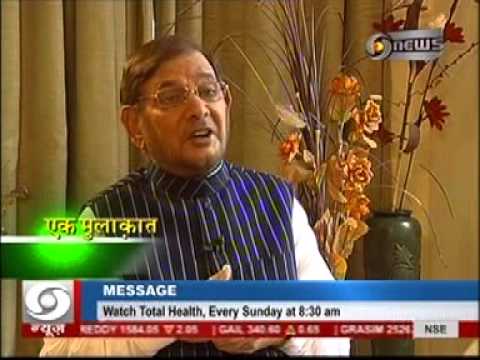 New Delhi: The famous face of Indian politics and former National President of Janata Dal United (JDU) Sharad Yadav passed away at 75. He breathed his last at a private hospital in Gurugram late on Thursday night. There is a wave of shock and gloom across the country including the political circles. Tributes from all over are pouring in for him.

Here on Dynamite News, we bring you this exclusive interview of Sharad Yadav taken on 23 June 2012 by the then reporter of DD News and now the founder and chief editor of Dynamite News and senior journalist Manoj Tibrewal Aakash for the famous talk show "Ek Mulakat" aired on Doordarshan News.

In this interview, as you can see, while answering to Manoj Tibrewal Aakash, the JD(U) leader explained his ideology of socialism. During this interview, you will also get to know about Yadav's views on education, his political journey, ups and downs of his life and many other things about him.

Sharad Yadav was born on 1 July 1947 in a farmer's family in Bandai village of Hoshangabad, Madhya Pradesh.

Sharad Yadav was elected MP 7 times-- four-time MP from Madhepura Lok Sabha constituency in Bihar, twice from Jabalpur in Madhya Pradesh and once from Badaun in Uttar Pradesh.

He was also the Minister of Civil Aviation, Consumer Affairs, Food and Public Distribution during 1999–2004.

It was his high stature in politics that he remained the National President of JD(U) for 13 years.

Sharad Yadav's daughter Shubhashini Yadav tweeted last night about her father's demise, 'Papa is no more. Sharad Yadav was undergoing treatment for a long time at Fortis Hospital in Gurugram.'

Chirag Paswan: Even single vote to JD(U) can spoil future of Bihar

Nitish Kumar has played his innings, people will send him into retirement: Sanjay Raut