Congress leader Rahul Gandhi on Saturday said that the Rashtriya Swayamsevak Sangh (RSS) has destroyed the institutional balance in the country by 'systematically attacking elected institutions and free press' for the last six years.

Thoothukudi: Congress leader Rahul Gandhi on Saturday said that the Rashtriya Swayamsevak Sangh (RSS) has destroyed the institutional balance in the country by 'systematically attacking elected institutions and free press' for the last six years.

Explaining his statement at VOC College in Thoothukudi Rahul Gandhi said, "A nation is a balance between its institutions, if that balance is disturbed then the nation is disturbed. That is the central idea. What are the institutions that make up the Indian nation? There are elected institutions Lok Sabha, Vidhan Sabhas, Panchayats. There is the judiciary, there is a supporting free press. These institutions together, they hold the nation together in place."

"What we have seen over the last six years, is a systematic attack on all these institutions. Democracy does not die with a bang, it dies slowly and I am sad to tell you that democracy in India is dead. It doesn't exist anymore. It is dead because one organization, the RSS has combined with huge finances to penetrate and disturb and destroy our institutional balance. That is what is happened," he said.

"There are many different manifestations of this. Misuse of sedition law, the killing of people, threatening of people. These are all symptoms of the problem. But the problem is that the concentration of the capital has combined with the organization of the RSS and has disturbed and destroyed the institutional balance in the country," the Wayanad MP said.

He said that there are multiple other balances that are also being distorted. "Remember India is a union of states, so all states come together to form the nation. When you destroy the institutional balance of the country, you also destroy the negotiation between the states. Because if all states do not have equal say then the power balance between those states is disturbed. And that is a serious problem for any country and that is what we are facing," he said.

The Congress leader added, "I think the spirit of this meeting is to understand what is happening and to defend the Indian nation and its institutions from this brutal assault which is taking place." 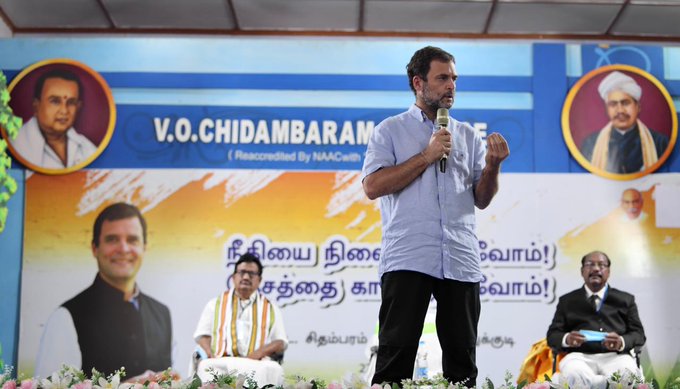 "Question isn't whether Prime Minister is useful or useless. Question is who is he useful to? PM is extremely useful to 2 people i.e. 'Hum do Humare Do', who are using him to increase their wealth and useless to the poor," Rahul Gandhi said while replying to a question at VOC College.

Tamil Nadu assembly elections will be held in a single phase on April 6 and the counting of votes will be done on May 2, the Election Commission of India (ECI) announced on Friday.

With this announcement, the model code of conduct comes into force. The assembly elections in the southern state are important for the national as well as the regional political parties.

Polls will be held for 234 seats in Tamil Nadu with the Congress-DMK and BJP-AIADMK alliance being the major groups contesting against each other. (ANI)

Would not call RSS as 'Sangh Parivar' from now onwards: Rahul Gandhi

Rahul Gandhi asks PM Modi: When, how will you evict Chinese troops from Ladakh ?