Samajwadi Party leaders staged a protest in front of the statue of Chaudhary Charan Singh on the premises of the state assembly on the 70th anniversary of the adoption of the Indian Constitution here on Tuesday. 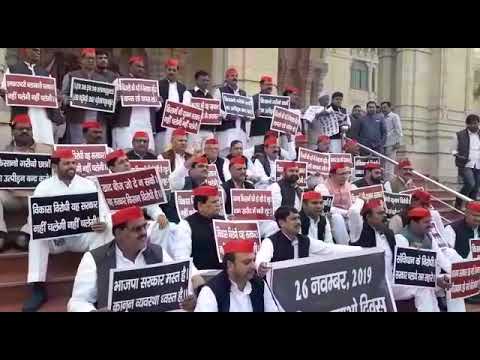 Lucknow: Samajwadi Party leaders staged a protest in front of the statue of Chaudhary Charan Singh on the premises of the state assembly on the 70th anniversary of the adoption of the Indian Constitution here on Tuesday.

"We are protesting in front of the statue because we want to protect the right of the public and stop this political oppression. It is the bad luck of our country that people who are murdering democracy every day are killing Babasaheb Ambedkar's morals and dreams also. These people want to force the ideology of Rashtriya Swayamsevak Sangh (RSS) on everyone. We, Samajwadi people who are the real heirs of the Mahatama Gandhi, Ram Manohar Lohia and BR Ambedkar," Anand Bhadauria, SP leader said.

Samajwadi Party leaders hold protest at UP Assembly on Constitution Day today; also raise the issues of farmers and law and order situation in the state. pic.twitter.com/DZhsSmNnSY

"Our constitution was built to protect everyone's rights and give equal opportunities to all but today the reality is different. RSS and BJP together are killing those rights and have created a mockery of it," Sunil Yadav, another party leader told ANI.

"Today Supreme Court is announcing decisions on people sitting on constitutional posts, this is because BJP has killed democracy and Constitution. It has cheated the people as well as looted them. Farmers are crying fouls. CBI and governor all have been manipulated by the BJP," Uday Veer told ANI.

Counting of votes for UP Assembly bypolls on Tuesday