Bollywood powerhouse Varun Dhawan announced his next project on Monday.


Mumbai: Bollywood powerhouse Varun Dhawan, who has been working on his father David Dhawan's 'Coolie No. 1', announced his next project on Monday. After the critically acclaimed 'Badlapur', the actor is reuniting with director Sriram Raghavan for a biopic on late Second Lieutenant Arun Khetarpal.

The 'Kalank' actor announced the news on the special occasion of Arun's birth anniversary. He also noted that playing a soldier was on his dream list and called it the 'most important' film of his career. 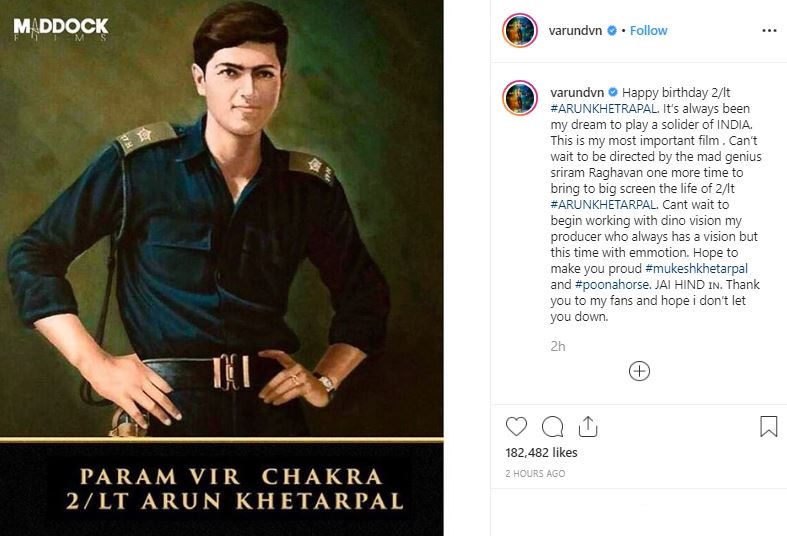 The yet-to-be-titled film is being produced by Dinesh Vijan, who has bankrolled movies like 'Stree', 'Hindi Medium', 'Cocktail' and 'Bala' to name a few.

The upcoming film is a biopic on Second Lieutenant Arun Khetarpal, who was an officer of the Indian Army and a posthumous recipient of the Param Vir Chakra, India's highest military decoration for valour in face of the enemy. At the age of 21, he sacrificed his life during the Indo-Pakistan War of 1971.

Reportedly, the film will pay a tribute to him and also will focus on his relationship with his father.

Also Read: Here's how Varun Dhawan is prepping for 'Coolie No. 1' remake

Sriram gave a groundbreaking role to Varun with 'Badlapur'. With the film, the 32-year-old actor delivered his career's best performance, leaving people surprised with his raw and rugged character.

Apart from the forthcoming biopic, Varun will be next seen in 'Coolie No. 1' and 'Street Dancer'. (ANI)