Violent protests have marred the nationwide bandh called by various Dalit organisations against the alleged dilution of the SC/ST (Prevention of Atrocities) Act by the Supreme Court. 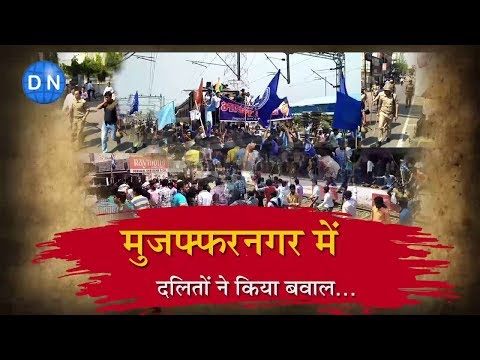 New Delhi: Violent protests have marred the nationwide bandh called by various Dalit organisations against the alleged dilution of the SC/ST (Prevention of Atrocities) Act by the Supreme Court.

Even as the Prime Minister Narendra Modi-led government has filed a review petition against the verdict, the burning of vehicles, rail roko agitations and various other blockades continue to be in place across various parts of the country.

Punjab, which has the highest number of Dalit population in the country, is practically at the forefront of the agitations.

Mobile internet services and public transport have been suspended in the state for the time being. Police forces were deployed in Amritsar to help control the angry mob.

Also, class X and XII examinations that were scheduled to be held today have been postponed for later and all educational institutions have been directed to stay closed.

Elsewhere, in Uttar Pradesh's Agra, Meerut, Ghaziabad, and Hapur, protesters took to the streets, rampantly damaging all sorts of public and private properties to express their disapproval of SC's ruling.

In Madhya Pradesh's Morena, where protesters blocked a railway track, curfew was imposed after one person died in the agitations, while section 144 (prohibits assembly of more than four people in the area) was imposed in Gwalior and Sagar, respectively.

Protests were also seen in the state's Bhind area, where protesters took to pelting stones.

The situation was equally bad in Rajasthan's Jaipur, Bharatpur and Barmer, where protesters stopped trains and vandalised shops among other violent approaches.

In Bihar and Jharkhand, angry protesters were involved in clashes with police personnel and were also involved in the stopping of numerous trains.

People in Uttrakhand also took part in the protests, with shops being forced to shut down in various parts of its capital, Dehradun.

Earlier today, Union Law Minister Ravi Shankar Prasad confirmed the filing of a petition to try and convince the apex court to reconsider its decision.

To check the misuse of the SC/ST act, the Supreme Court, on March 20, laid down some provisions before implicating someone under the said law.

The top court directed that a preliminary inquiry would be conducted by the Deputy Superintendent of Police to ensure that allegations were not frivolous and to avoid the false implication of an innocent.

The court, while introducing a provision for anticipatory bail in the act, also held that a government official cannot be prosecuted on a mere allegation of committing an offence under the Act, without the sanction of an appointing authority. (ANI)

Mayawati: The new law must not reek of RSS ideology

UP: Two booked for raping woman, recording and posting video of act online in Rampur