Comedian Vir Das on Tuesday issued a clarification regarding a recently uploaded video on YouTube, titled 'I come from two Indias' that was a part of his recent performance at the John F Kennedy Center in Washington.

New Delhi [India]: Comedian Vir Das on Tuesday issued a clarification regarding a recently uploaded video on YouTube, titled 'I come from two Indias' that was a part of his recent performance at the John F Kennedy Center in Washington.

The video uploaded by Vir has been doing the rounds on social media that features the comedian talking about 'Two Indias' that he comes from.

In the six-minute-long video that the comedian uploaded on his YouTube channel on Monday, he could be heard contrasting the dark sides of India by taking a dig at issues like- its battle against COVID-19, gang rapes, farmers' protest and more. 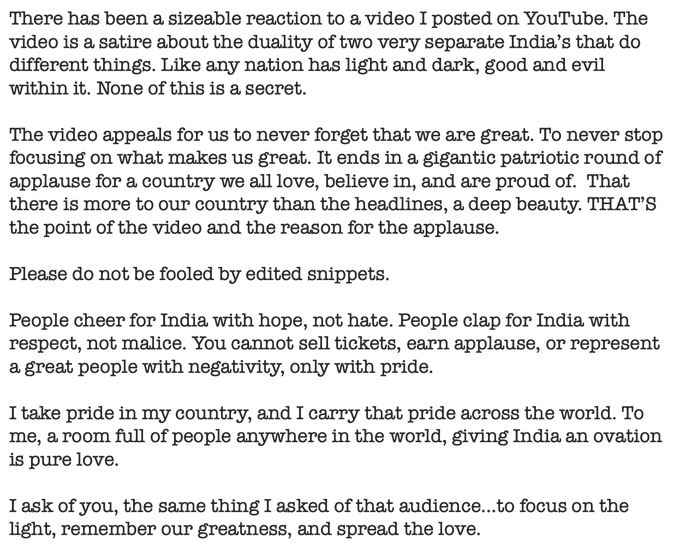 "It's not the first time #VirDas has insulted India & Hindus. Why are these comedians & Bolywood gang  after Hindus for worshiping Feminine? Their constant attempt 2 defame Hindus by linking every crime with Sanatan culture is a part of a bigger conspiracy. #VirDasInsultsIndia," a user wrote.

Lawyer-politician Charu Pragya wrote, "Who is this "we" that you are talking about? Your freedom of speech doesn't mean the slander of the male population of my country. Your generalisation is beyond shameful. You are an Indian that decided to demean India for your 15 seconds of fame!"

Addressing the backlash, Vir shared a statement as a clarification to his intentions regarding his monologue at the John F Kennedy Centre.

"There has been a sizeable reaction to a video I posted on YouTube. The video is a satire about the duality of two very separate India's that do different things. Like any nation has light and dark, good and evil within it. None of this is a secret," the statement posted by Vir read.

The 42-year-old stated that his intention was to serve as a reminder that the country, despite its issues, is "great."

"The video appeals for us to never forget that we are great. To never stop focusing on what makes us great. It ends in a gigantic patriotic round of applause for a country we all love, believe in and are proud of. That there is more to our country than the headlines, a deep beauty. THAT'S the point of the video and the reason for the applause," he wrote.

Vir also asked everyone not to be fooled by edited snippets.

"People cheer for India with hope, not hate. People clap for India with respect, not malice. You cannot sell tickets, earn applause, or represent great people with negativity, only with pride. I take pride in my country, and I carry that pride across the world. To me, a room full of people anywhere in the world, giving India an ovation is pure love," Vir wrote.

Concluding his statement, Vir asked everyone to focus on the "light, remember our greatness, and spread the love."

Kapil Sibal wrote, "Vir Das None can doubt that there are two India's Just that we don't want an Indian to tell the world about it. We are intolerant and hypocritical."

In the latest development, a police complaint has also been filed by a Delhi resident Aditya Jha against Vir at Tilak Marg Police Station in the national capital for allegedly using derogatory language against India during his performance at the John F Kennedy Center for Performing Arts in Washington, which the actor-comedian had uploaded on YouTube on Monday, Delhi Police said on Wednesday.