A team of Customs Department on Friday seized a container with 18 tonnes of red sanders.

Chennai: A team of Customs Department on Friday seized a container with 18 tonnes of red sanders, a category of wood classified by the International Union for Conservation of Nature (IUCN) as "endangered" under Red list, worth Rs 9 crore from a truck here.

One person has been arrested in this regard.

On specific intelligence inputs, a team of customs officers conducted a special check on the movement of in-coming trucks into Kattupalli port area.

“The team noticed a container truck parked before the entry gate. On nearing, the team found that the truck driver had fled the spot. Efforts are being made to trace him,” Rajan Chaudhary, Commissioner of Customs stated in a press release. 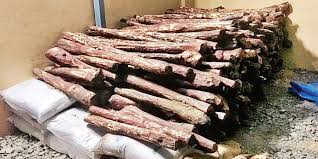 On interrogation, the shipping bill and gate pass found in the bus appeared to be forged.

The wooden blocks have been seized under the Customs Act, 1962 read with FT(D&R) Act.

Also Read: Over Rs 2 cr cash, gold seized ahead of elections in Telangana

The forest officials were called to further examine and certify the red sander wood. Further investigation is underway. (ANI)