Akhilesh dares BJP to take back his security cover

Samajwadi Party supremo Akhilesh Yadav on Tuesday said he does not need any security cover and dared the BJP to take it back. 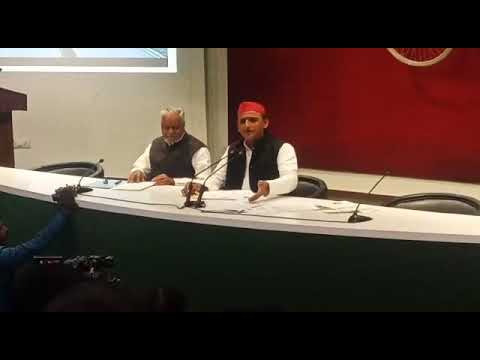 Lucknow: Samajwadi Party supremo Akhilesh Yadav on Tuesday said he does not need any security cover and dared the BJP to take it back.

He said this when asked about the security risk to him as the leader had claimed that he had received a threat call from a ruling party leader.

He made the allegations recently after a youth disrupted a meeting addressed by him, shouting a religious slogan.

"I don't need security. I want to live free. This is not a matter of security, I want to ask how can a local intelligence inspector come to my press conference. How can someone come in a programme in the party office," Akhilesh said.

"Why my NSG was removed? They (BJP) have taken back my house and vehicle. They are free to take back my security also. I love to cycle alone. Now the time is coming whey cycle is going to run fast," he said.

'Cycle' is the party symbol of the Samajwadi Party.

Leader of the Opposition Ram Govind Chaudhary of Samajwadi Party had raised the issue of security threat to Akhilesh in state assembly on Monday.

Yadav had recently claimed that he had received a threat call and a message from a BJP leader after a youth shouted 'Jai Shri Ram' at one of the gatherings he was addressing. The former Uttar Pradesh chief minister had made the claim while addressing a function at his party office in Kannauj on Saturday.

"There is a threat to my life from a BJP leader. I have received a threat call and a message from him. I have saved the message in my phone and will address the media in this regard in Lucknow in a day or two," he had said.

Yadav was addressing party workers on the rising inflation in the country, when a youth from the crowd interrupted him and asked him what he planned to do about it if he returned to power.

The SP chief asked the youth to come closer as he was not audible. At this, the youth shouted 'Jai Shri Ram' and Yadav questioned him whether he has any association with the Bharatiya Janata Party.

Following the incident, Yadav claimed there was a threat to his life from a BJP leader.

"Just two days ago, a BJP leader has threatened me and now today, this man was trying to jump inside the security cordon. He would have taken my life. What action will you initiate against him and under which act you will book him," he had asked.

Responding to his concerns, Parliamentary Affairs Minister Suresh Kumar Khanna had said in the Assembly that Akhilesh has been provided 'Z-Plus' category security which comprises 182 security personnel.(PTI)