Biswabhusan Harichandan on Wednesday took oath as the new Governor of Andhra Pradesh.

Acting Chief Justice of Andhra Pradesh High Court Justice C Praveen Kumar administered the oath of office to the Governor at a function at the temporary Raj Bhavan in Vijayawada.

The premises that was previously used as the Chief Minister's Camp Office has been converted into the Raj Bhavan for the new Governor.

Harichandan is the second Governor and the first one to be appointed exclusively for the state after the bifurcation in June 2014. Chief Minister Y S Jagan Mohan Reddy, his Cabinet colleagues, legislators, Chief Secretary L V Subrahmanyam and senior bureaucrats attended the swearing-in ceremony.

Harichandan, 85, hails from a family of freedom fighters in Odisha.

He began his career as a lawyer in the Odisha High Court in 1961 and joined the then Bharatiya Jana Sangh in 1971. He joined the BJP in 1980 when it was founded and became the president of the Odisha state unit. 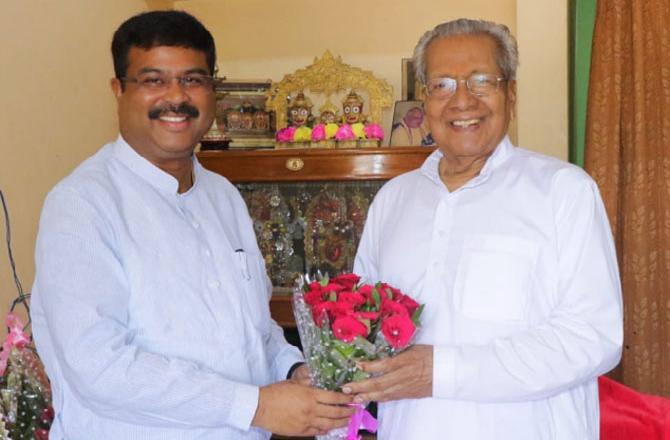 During Emergency, he was arrested under the Maintenance of Internal Security Act (MISA) in 1975 as he fought against suppression of judges in the Supreme Court.

In 1977, Harichandan was elected to the Odisha Assembly for the first time and became a Cabinet minister for law. He also held various other portfolios as minister in the Odisha Cabinet.

Harichandan is a prolific writer whose articles on various issues have been published in newspapers in Odisha. He has published books like Marubatash (six one-act plays), Mahasangramar Mahanayak, Buxi Jagabandhu, Paika Mutiny and his autobiography Sangar Sarinahin.

Yeddyurappa to take oath as Karnataka CM at 6 p.m

Sanjay Yadav sworn in as Chief Justice of Allahabad HC