A body of man was found hanging booth office of the Bharatiya Janata Party in Siliguri on Thursday morning.

Siliguri: A body of a 42-year-old man was found hanging booth office of the Bharatiya Janata Party (BJP) in Siliguri on Thursday morning.

Locals out on their morning walk had reportedly spotted the body hanging from the booth office and alerted the police which came and took the body away for postmortem. An investigation is underway.

The deceased has reportedly been identified as Nitya Mandal who used to work as a labourer.

BJP spokesperson Shahnawaz Hussain termed the incident as an example of Bengal's jungle raj and asked the Election Comission to take cognizance of the matter. 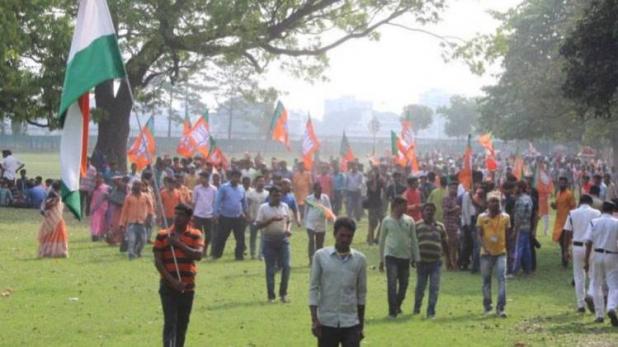 "There is jungle raj in Bengal, the Election Commission should take cognizance of this incident. There is no rule of law in Bengal, BJP workers are continuously getting killed there.

Is Trinamool Congress a political party or a murderous organisation? This is really unfortunate, the people of Bengal will answer this with their votes. CM Mamata Banerjee thinks she has become the absolute authority in Bengal after becoming CM, the people make the CM and dispose of the CM from the CM seat. The people of Bengal will teach a lesson to Mamata Banerjee in the Lok Sabha election and she will not become the CM post the assembly elections in Bengal."

BJP to hold 'Krishak Soho Bhoj' for Bengal farmers in 1,263 mandals on Feb 18