Protests against the Agnipath scheme are continuing in many parts of the country. Congress is protesting at various places in the national capital including Connaught Place against Agnipath scheme and ED's questioning of Rahul Gandhi. Read further on Dynamite News: 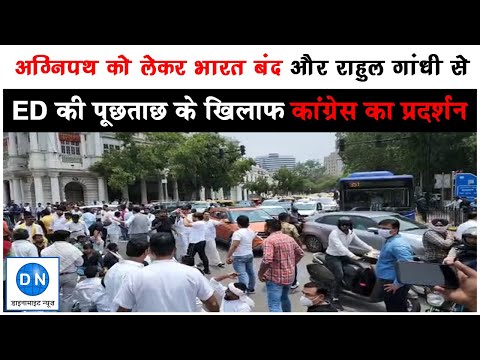 New Delhi: The Bharat Bandh called by some organizations against the Agnipath scheme has had a huge impact acorss the country. Congressmen are protesting strongly at many places including Connaught Place, Jantar Mantar and Shivaji Bridge Railway Station in Delhi against the ED's interrogation of Rahul Gandhi for fourth day.

A large number of Congress leaders and workers on Monday took to the streets of Delhi against the ED's questioning of Rahul Gandhi and against Agnipath scheme. They are protesting with slogans at different places. They are demanding that the government should immediately withdraw the Agnipath scheme.

Former Congress president Rahul Gandhi on Monday again appeared in the Enforcement Directorate (ED) office for fourth day after three consecutive days of questioning last week in an alleged money laundering case related to the National Herald newspaper and is being questioned by the probe agency.

Rahul Gandhi arrived at the ED headquarters in central Delhi at about 11am.