The actor won the Miss World pageant in 1994 following which the Bollywood diva made her debut with 'Aur Pyaar Ho Gaya' in 1997.

She is often cited as 'the most beautiful woman in the world'. 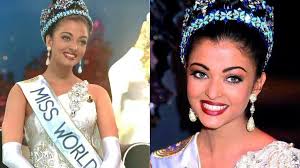 From Devdas' Paro to Hum Dil De Chuke's Nandini to Mohobbatein's Megha, she has ruled the screen with her acting skills. However, her journey did not limit to Bollywood alone as she also explored Hollywood with some remarkable roles in 'Bride And Prejudice', 'Provoked,' among others.

The blue-eyed beauty has always charmed the screen and red carpets. She was the first Indian actor to be a jury member at the Cannes Film Festival in 2003.

In 2007, she married fellow actor Abhishek Bachchan soon after their movie 'Guru' witnessed the success.

Last year, Aishwarya celebrated the day in Rome with her husband Abhishek and her daughter. (ANI)