Several people were reported missing after a massive fire broke out in a four-storey building near Mundka metro station in Delhi on Friday evening. Read more on Dynamite News:

New Delhi: Several people were reported missing after a massive fire broke out in a four-storey building near Mundka metro station in Delhi on Friday evening.

Panic gripped the kin of those who went missing after the fire mishap as they were unable to find their loved ones.

"We are searching for her (Yashoda Devi) but we didn't find her. We got to know about the fire from one of my friends. We immediately reached here and looked for Yashoda everywhere, even in hospitals," Govind, one of the family members told. 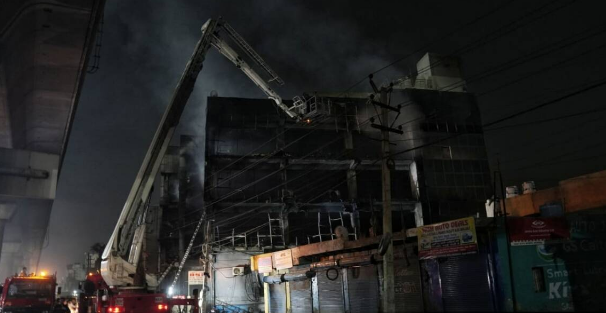 "I got a call from Muskaan that a huge fire broke out in the building here. She requested to save her from the spot. We immediately reached her office and since then, we are not able to connect with her. We looked for her everywhere, every hospital, but failed to find her," said Nargis, Muskan's family member.

As many as 27 bodies have been recovered from the building that caught fire yesterday evening so and twelve people have been injured in the accident.

However, the fire officials informed that the Mundka blaze is now under control.

The National Disaster Response Force (NDRF) team has also reached the spot for rescue operations. A total of 50 people were rescued so far, according to the Deputy Commissioner of Police (Outer District) Sameer Sharma.Earlier in the day, on preliminary enquiry, it was found that it is a four-story commercial building generally used for providing office space for companies, the police said.

The fire broke on the 1st floor of the building which is an office of CCTV cameras and router manufacturing company. The owners of the company are in police custody. (ANI)

Delhi: Fire at 2 hospitals in the City; no casualty reported

Delhi: Fire breaks out at Rohini Court; No casualty reported