Polling for 60 Assembly constituencies and two Lok Sabha seats in Arunachal Pradesh was held simultaneously on April 11. Counting of votes will take place on May 23.

"Polling parties in Arunachal Pradesh=. 13583 feet altitude Luguthang - Mukto Assembly Constituency. Whatever the challenges - they do cross them all to reach the Voters afterall!" EC spokesperson Sheyphali Sharan tweeted on Saturday. 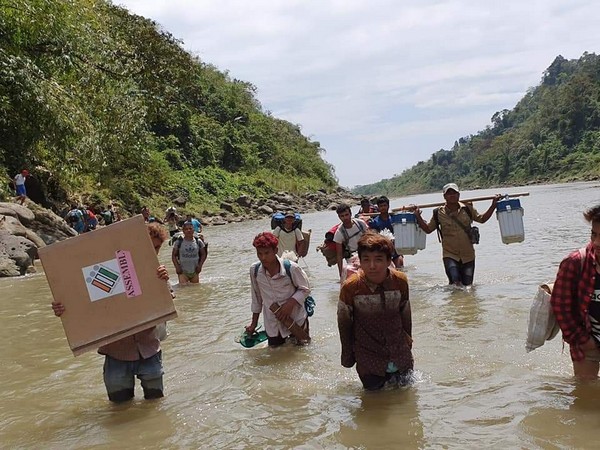 As 17th Lok Sabha elections are being conducted in seven phases from April 11 to May 19, officials and security personnel are trekking to remote areas of the country to set up poll booths.

In Arunachal, it took two days to reach several polling stations situated at inaccessible areas. Also, some of the polling officials were airlifted since they were deployed in isolated places. There were 2,202 polling stations in the state for 7,98,249 voters. This year, the EC has taken several steps to add more service voters in the election process. Awareness campaigns through electronic, social, print and other media were given due attention.

According to EC officials, an estimated 66 per cent voters of the total of 7.98 lakh electorate cast their votes in the simultaneous Assembly and Lok Sabha elections in Arunachal Pradesh on Thursday. However, the exact figures are yet to be revealed by the EC.(ANI)