At least 17 students of a coaching class were killed when they jumped off a commercial complex after it caught fire Friday afternoon, Gujarat Gujarat Deputy Chief Minister Nitin Patel said. 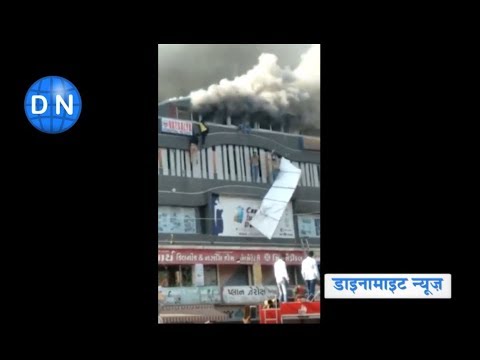 Surat: At least seventeen students dead after fire broke out in commercial complex on Friday afternoon.

The fire engulfed the third and fourth floor of the Taxshila Complex here, the official said.

#Visuals Gujarat: A fire broke out on the second floor of a building in Sarthana area of Surat; 18 fire tenders at the spot. More details awaited. pic.twitter.com/iY0O588Pom

The fire engulfed the third and fourth floor of the Taxshila Complex here, he said.

Visuals on TV channels showed students jumping off the third and fourth floors of the building.

A fire official said 19 fire tenders and two hydraulic platforms were pressed into service to douse the fire.

Locals were seen helping in the rescue operation to save stranded students as well as other occupants of the four-storey building.

Gujarat CMO on fire at a coaching centre in Sarthana area of Surat: Chief Minister Vijay Rupani has ordered an investigation into the incident. CM has also declared financial help of Rs 4 lakh each to the families of children who died in this incident https://t.co/50oRpdmk5Y

"Students on fourth and third floor jumped off to the ground to save themselves from fire and smoke. Many have been rescued and sent to hospital. The operation to douse the fire is on," said a fire official.

In a video clip of the incident, some young students can be seen coming out of the windows of a coaching class and jumping off from the third and fourth floors amid thick smoke coming out from the building.(PTI)

Fire breaks in godown near Statue of Unity