Maha crisis: Meeting of Eknath Shinde with rebel MLAs underway to discuss next course of action

The meeting of rebel Shiv Sena MLA Eknath Shinde and other MLAs is underway in Goa to discuss the further course of action after the Uddhav Thackeray government crumbled on Wednesday.

Goa: The meeting of rebel Shiv Sena MLA Eknath Shinde and other MLAs is underway in Goa to discuss the further course of action after the Uddhav Thackeray government crumbled on Wednesday. 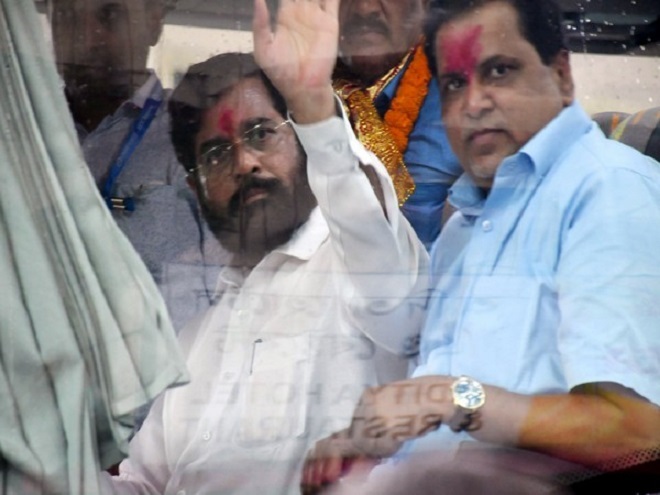 The meeting was scheduled to take place this morning before the faction leaves for Mumbai, Deepak Kesarkar told Notably, the camp was supposed to return to Mumbai early morning, had there been a Floor Test against the Uddhav government. With the cancellation of the test, the MLAs are likely to depart from Goa after a night layover from Guwahati.

Meanwhile, all Congress MLAs will also meet at Maharashtra Vidhan Bhavan to discuss the present political situation in the state. Earlier today, Maharashtra Assembly Secretary Rajendra Bhagwat informed all state MLAs that as per the Governor's orders the special session that was scheduled on Thursday will now not be convened.

The Floor Test that was convened by Governor Bhagat Singh Koshyari was challenged in the Supreme Court by the Shiv Sena. The apex court, however, declined to stay the Floor Test and in its observation said that the floor of the House was the only way to settle these issues of democracy.

Minutes after the order by the top court, Thackeray addressed the people of the state via social media in which he announced his decision to step down as chief minister and as a Member of the Legislative Council.

The announcement brought an end to the political crisis that erupted in the state for over a week with a faction of Shiv Sena MLAs revolting against him for joining hands with NCP and Congress to form the government.

Meanwhile, the stage is set for the return of a BJP-led government in the state with the party, which is the single-largest party in the Maharashtra Assembly with 106 MLAs, likely to stake claim to form the government.

As Leader of the Opposition, Devendra Fadnavis is set to stake claim to the Chief Minister's post for the third time. Fadnavis, who met the party's top brass twice in a week in Delhi, said that the future course of action will be announced today.

The BJP, on the other hand, is likely to hold a series of meetings to deliberate on the formation of government in the state along with the rebel Shiv Sena MLAs led by Eknath Shinde, which had been camping in first Surat, then Guwahati and had landed in Goa on Wednesday night.

The BJP will approach the Governor to stake claim to form the government, which the Shinde faction would back with their 39 Shiv Sena MLAs and other independents. (ANI)