A combined team of Moreh Police and commandos seized the arms and ammunition from a car travelling towards Imphal from Moreh at Kondong Lairembi Police check-post and arrested the driver identified as Khaijamang Touthang.

The team seized six fourth generation Glock 21 pistols with 12 magazines, six cleaning rods, 12 pairs of pistol grips and 6 'H' shaped plastic fibre accessories. On the other hand, the district police and commando personnel arrested two other persons, including a woman and seized around 839 grams of brown sugar at the Kondong Lairembi check-post on Friday afternoon.

The arrested persons have been identified as Zamkhosei and Vakneijem Gangte. They were travelling in a vehicle towards Imphal from Moreh. The combined team of Moreh Police and commando personnel conducted thorough checking of the vehicle at Kondong Lairembi check-post under the command of M Amit, Additional SP Operations Tengnoupal. 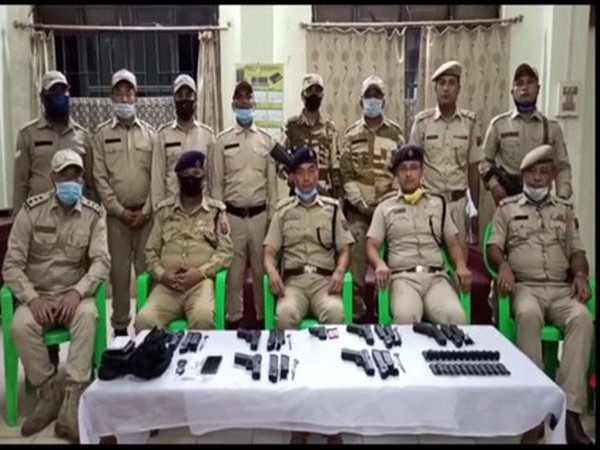 As many as 70 packets of brown sugar (44 packets in soap cases and 26 packets without soap cases) weighing around 839 grams were found concealed inside the back seat of the vehicle. As per preliminary interrogation, the contraband items belong to the driver of the vehicle, Zamkhosei, and the woman passenger, Gangte, had knowledge of the said contraband, police said.

The arrested persons and the seized items have been handed over to Moreh Police Station for further necessary legal action. (ANI)