NASA on Tuesday found Vikram Lander of Chandrayaan-2 and released images of its impact site on the Moon, where the spacecraft had lost communication moments before making a soft landing on the far side of the lunar surface.


Washington DC: NASA on Tuesday found Vikram Lander of Chandrayaan-2 and released images of its impact site on the Moon, where the spacecraft had lost communication moments before making a soft landing on the far side of the lunar surface.

The NASA posted images clicked by its Lunar Reconnaissance Orbiter (LRO) Camera, showing the site's changes on the Moon and the impact point before and after the spacecraft had made a hard-landing on the lunar surface.

Also Read: NASA's Mars 2020 rover to search for signs of past microbial life

It also indicated the impact spot of the lander and an associated debris field created by the crash with blue and green dots respectively.

The #Chandrayaan2 Vikram lander has been found by our @NASAMoon mission, the Lunar Reconnaissance Orbiter. See the first mosaic of the impact site https://t.co/GA3JspCNuh pic.twitter.com/jaW5a63sAf

"Shanmuga Subramanian contacted the LRO project with a positive identification of debris. After receiving this tip, the LROC team confirmed the identification by comparing before and after images," it added.

"The Lunar Reconnaissance Orbiter Camera team released the first mosaic (acquired on September 17) of the site on September 26 and many people have downloaded the mosaic to search for signs of Vikram. When the images for the first mosaic were acquired the impact point was poorly illuminated and thus not easily identifiable. Two subsequent image sequences were acquired on October 14 and 15, and on November 11. The LROC team scoured the surrounding area in these new mosaics and found the impact site and associated debris field," the statement continued.

"The debris first located by Shanmuga is about 750 meters northwest of the main crash site and was a single bright pixel identification in that first mosaic," NASA further said.

Also Read: US astronauts embark on the first all-female spacewalk

Vikram Lander was scheduled to make a soft-landing near the south pole of the moon on September 7. However, minutes before its scheduled soft-landing, ISRO had lost communication with the lander at 2.1 kilometres above the Moon's surface.

The Vikram Lander had successfully separated from Chandrayaan-2 Orbiter on September 2. After revolving around the Earth's orbit for nearly 23 days, the craft had begun its journey to the moon on August 14.

The mission took off from the Satish Dhawan Space Centre in Sriharikota on July 22. 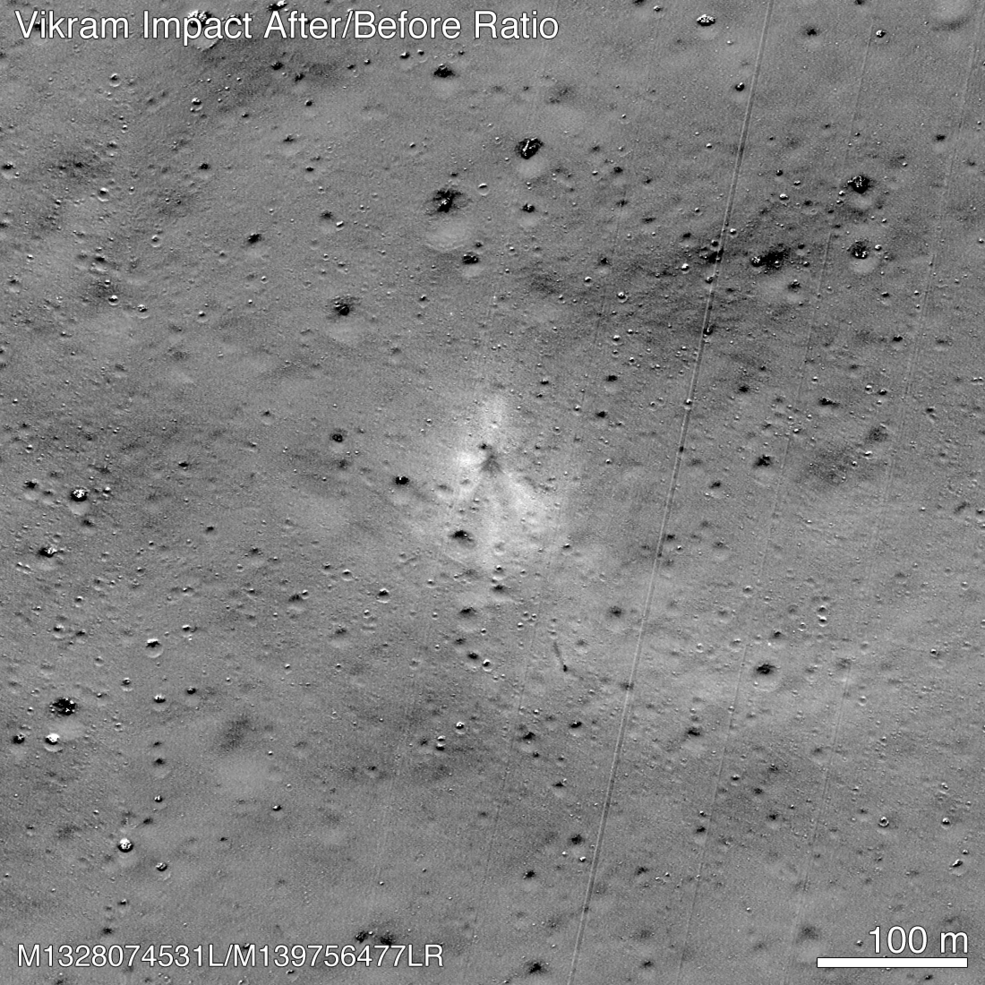 Despite the setback, NASA said that getting close to the Moon's surface was an "amazing achievement".

In September, the US space agency had released high-resolution images of the lunar region where Vikram Lander had attempted a soft landing on the far side of the Moon. However, owing to dusk, the craft could not be located.

"Our Lunar Reconnaissance Orbiter mission imaged the targeted landing site of India's Chandrayaan-2 lander, Vikram. The images were taken at dusk, and the team was not able to locate the lander. More images will be taken in October during a flyby in favourable lighting," NASA had tweeted. (ANI)