The Opposition wants to get me out of their way for launching a crackdown on their corrupt activities, Prime Minister Narendra Modi said on Tuesday.

Sambalpur: The Opposition wants to get me out of their way for launching a crackdown on their corrupt activities, Prime Minister Narendra Modi said on Tuesday.

“It is with people's support that we were able to take strong decisions. Otherwise, in the past, we have seen weak and corrupt government in Delhi which has done many scams. As soon as money would come, some would start robbing it. After I attacked their (Opposition) corruption they are in so much pain that they want to remove me from their way,” he said while addressing a rally here.

"In such hot weather, such a huge crowd, such enthusiasm; pictures of these rallies are giving sleepless nights to others. People are supporting us because they want a strong government," he added.

Modi asserted that the country was never short of means and resources, but of intent.

“If there was a shortage it was of the right use of public money. Past governments never paid any attention towards ensuring that the funds being sent from Delhi are helping people or not,” he claimed.

The Prime Minister said that earlier, a majority of the funds being sent for public welfare was not reaching the right recipients, and went on to acknowledge that times have now changed.

“If middlemen save 85 paise out of 100 paise, it won't be possible to construct hospitals, schools or bridges. After Independence, this happened for many years but no one stopped it. But now, Narendra Modi government has made such a system that when we give 100 paise all of it is spent for the welfare of people”, he mentioned. 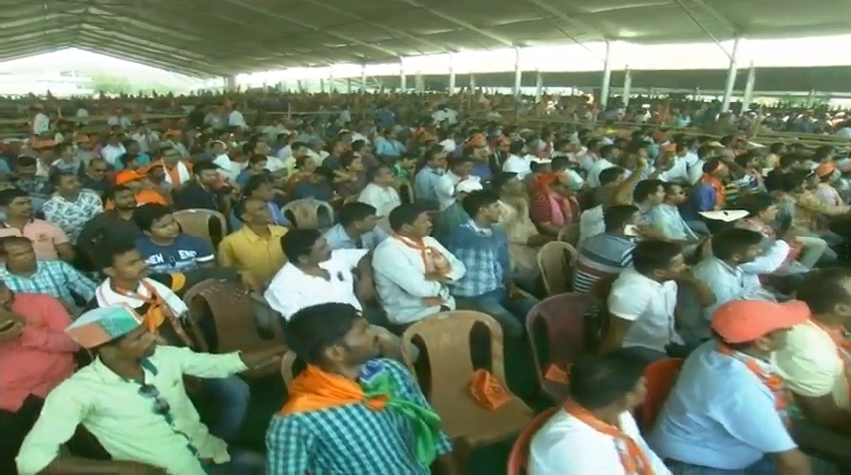 Modi also said that after BJP forms the new government, a dedicated water ministry under the name of ‘Jal Shakti’ ministry will be established under which a mission to bring the water of rivers, seas, and rain to the needy across the country will be launched. Later in the day, Prime Minister Modi will hold a roadshow and address a public rally in Odisha’s capital Bhubaneshwar. Sambalpur and Bhubaneshwar will go to polls in the third phase on April 23.

The Lok Sabha and Assembly elections are being held simultaneously in four phases in Odisha from April 11 to April 29. Counting of votes will take place on May 23. (ANI)