Prime Minister Narendra Modi interacted with beneficiaries of the Pradhan Mantri Awas Yojana -Gramin (PMAY-G) and said the Central Government is working to ensure a home for every Indian by 2022.

New Delhi: Prime Minister Narendra Modi on Tuesday interacted with beneficiaries of the Pradhan Mantri Awas Yojana -Gramin (PMAY-G) and said the Central Government is working to ensure a home for every Indian by 2022.

"The Awas Yojana is not merely about brick and mortar. This scheme is about a better quality of life and dreams coming true. We are working towards ensuring that every Indian has a home by 2022, when India marks 75 years since Independence," said Prime Minister Modi while talking to the Awas Yojana beneficiaries via NaMo app.

The Prime Minister said that in the four-year tenure of the National Democratic Alliance (NDA) government over one crore houses have been constructed.

The Prime Minister said that the current government is working for "all and not limited people." 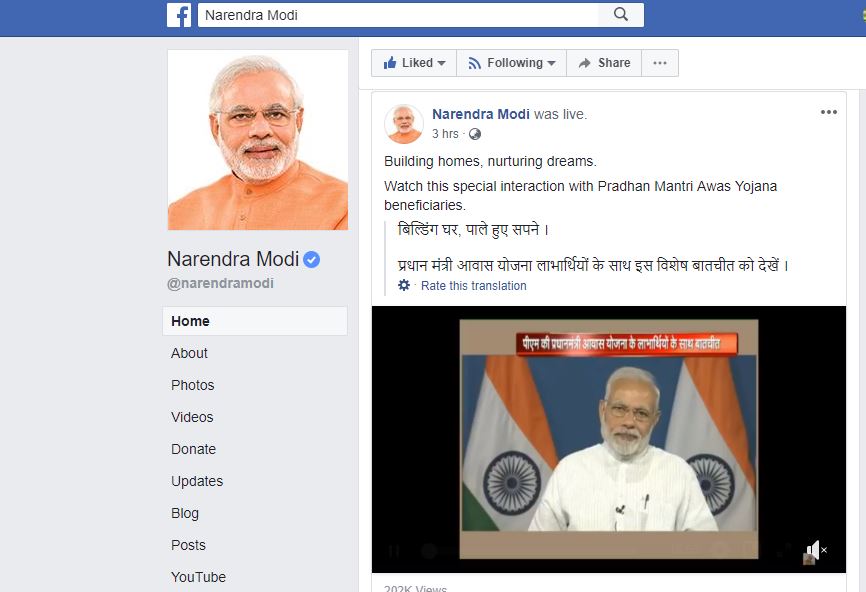 "During UPA government, beneficiaries were selected through BPL(Below Poverty Line) list. We started doing selection through socio-economic-caste-censux, with the help of which we added those beneficiaries who were left earlier," the Prime Minister said.

"We have been working to free the housing sector from middlemen, corruption and ensuring that the beneficiaries get their own home without hassles," he added while stressing upon how with the help of the latest technology, the government is ensuring faster building of houses for the poor in rural and urban areas at affordable cost.

He said that the focus of the scheme is to ensure more women, Divyang sisters and brothers, people from SC, ST, OBC and Minority communities get a roof.

"Due to this scheme, there are employment opportunities being created for people. At the same time, we are working on skill development to enable faster and better quality construction of the houses," the Prime Minister said.

While talking to the beneficiaries from Chhattisgarh, Tamil Nadu, Uttar Pradesh, Jharkhand, Madhya Pradesh and Assam, the Prime Minister also requested them to avoid consuming tobacco and alcohol. (ANI)

Narendra Modi elected as the leader of the NDA