The Supreme Court order on the Rafale jet deal issue Friday rocked the Rajya Sabha which witnessed intense sloganeering by the ruling BJP and opposition Congress members leading to adjournment of House proceedings.

Amid noisy protests, Leader of the House and Finance Minister Arun Jaitley was heard saying that the Opposition has been demanding a debate on the jet deal and so the question hour should be suspended to take up the issue.

Besides the two major parties, members of the AIADMK and the Samajwadi Party too raised slogans in support of their respective demands.

No sooner the House assembled for the Zero hour, members of the Samajwadi Party raised slogans relating to the recent violence in UP's Bulandshahar district while AIADMK members trooped into the well over the Cauvery river water issue. Buoyed by the clean chit given by the Supreme Court on the Rafale jet deal, members of treasury benches were heard raising slogans demanding an apology from Congress President Rahul Gandhi for his alleged lies on the issue.

Congress members too entered the Well of the House to demand a probe by a Joint Parliamentary Committee (JPC) into the purchase of jets from the French company Dassault.

Amidst uproar, the members were heard raising slogans -"We want JPC" and "Chowikdar Chor Hai". 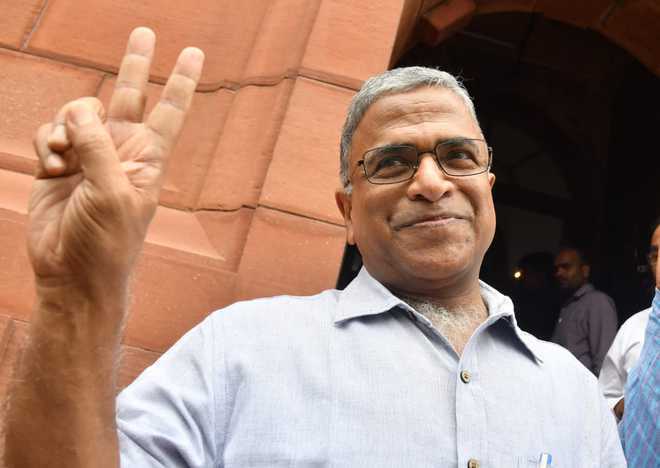 The uproar started as soon as the proceedings began following which Deputy Chairman Harivansh first adjourned the House till 1130 hours. However, as the protests intensified, he adjourned the Rajya Sabha till Monday after his repeated attempts to bring order in the House failed.

Before adjourning the House for the day, Harivansh tried to run the Zero Hour proceedings smoothly and some of the members even read out mentions amid uproar. Unlike other days, there was ruckus in the House even when ministers were laying listed paper on the table of the House. (PTI)

Triple Talaq Bill to be tabled in Rajya Sabha next week

Ananth Kumar: Congress doesn't have democracy in their genes