Congress President Rahul Gandhi Wednesday charged Prime Minister Narendra Modi and caretaker Telangana Chief Minister K Chandrasekhar Rao with having a "partnership" and vowed to end their rule at the Centre and in the state.


Kodad:  Congress President Rahul Gandhi Wednesday charged Prime Minister Narendra Modi and caretaker Telangana Chief Minister K Chandrasekhar Rao with having a "partnership" and vowed to end their rule at the Centre and in the state.

"In a few days, a storm will come in Telangana, a storm of change will come, and the voice of people of Telangana will again control the state, and fulfil the dreams of Telangana," he said predicting victory for the Congress-led alliance in the December 7 Assembly polls.

"We would like to stand with you to complete this task. We will listen to you and run the state. We want to build your Telangana and this is going to happen", Gandhi said.

Addresssing his last campaign meeting in Telangana ahead of the polls, Gandhi alleged "there is a partnership between Narendra Modi and KCR (as Rao is referred to by many). KCR supports Narendra Modi in Delhi (at the central level)."

In this context, he noted that the TRS had supported the BJP-led NDA government on GST, demonetisation, and Presidential and Vice-Presidential elections.

"And its (TRS) job is to protect Narendra Modi in the country. We are going to break this partnership. First, we will defeat KCR here (in Telangana). And then, Congress and other parties will defeat Narendra Modi," he said.

"We are firm on removing Narendra Modi," he added.

Gandhi said Modi in his speeches criticises him, Andhra Pradesh Chief Minister and TDP chief N Chandrababu Naidu and other leaders of the Congress-led alliance in Telangana but spares KCR.

"Narendra Modi has got the remote control of Telangana. KCR did corruption. CBI and ED are in the hands of Narendra Modi", he charged.

Targeting the TRS government, he claimed that 4,500 farmers committed suicide during its regime in the state, which today also has 35 lakh unemployed youth.

Gandhi charged Modi and KCR with not doing anything for the welfare of farmers, and said the first thing that the Congress-led alliance government would do after coming to power was to waive loans of farmers.

He also claimed that Modi waived Rs 3.5 lakh crore loan of 15 rich people in the country, while "his friend" KCR redesigned projects to help "rich contractors".

When Telangana was formed, it was a revenue-surplus state but today it has a debt of Rs 2.5 lakh crore, he alleged and said KCR's son's (K T Rama Rao) income reportedly jumped by 400 per cent during the period. 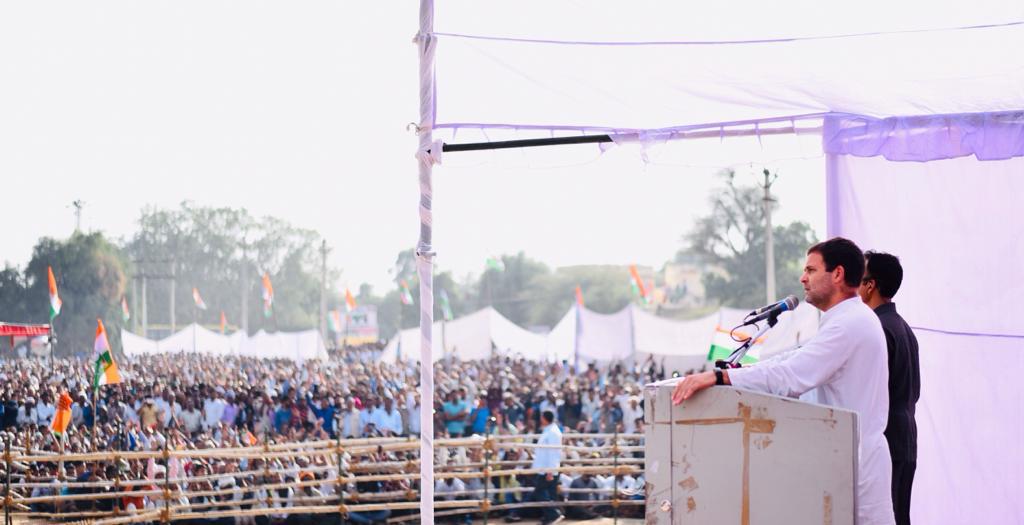 Accusing KCR of running "family rule" in Telangana, he said it would not be one family rule after the Congress-led alliance comes to power. "The people of Telangana will run the state."

TRS like the BJP is going it alone in the Assembly polls. The Congress and TDP are part of the 'People's Front' which also comprises the CPI and Telangana Jana Samiti. (PTI)

Rahul Gandhi took on BJP for waiving loans of the rich

Rahul: PM's ego not allowing him to meet demand for 'shaheed' status for slain paramilitary jawans