Shastri shared a picture on Instagram on Tuesday along with SRK, Tandon, and industrialist Gautam Singhania.

He captioned the post as: "Alibag is heaven. Great conversations with some brilliant minds of our times - @iamsrk @officialraveenatandon and @gautamsinghania99 #Blessed #FriendsLikeFamily". 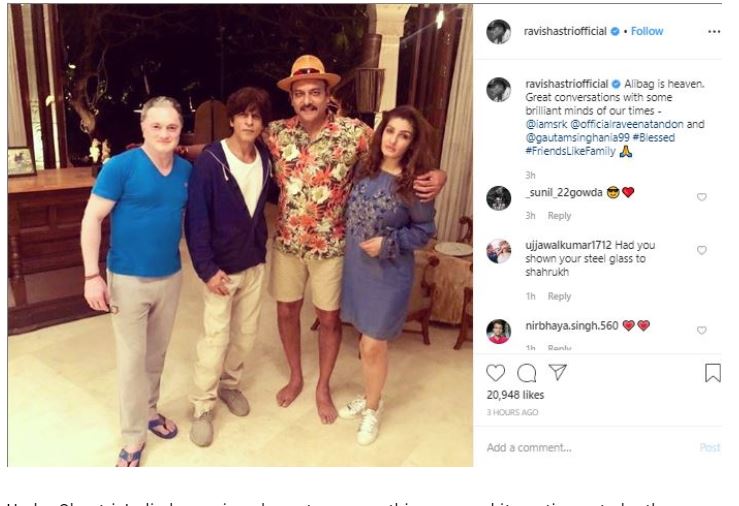 Under Shastri, India has enjoyed great success this year, and it continues to be the number one ranked team in the ICC Test rankings.

The Men in Blue also managed to reach the semi-finals of the ICC Cricket World Cup this year. The team lost in the penultimate clash to New Zealand.

On August 16 this year, it was announced that Shastri would continue to coach India and his tenure was extended till ICC T20 World Cup 2021.

The three-member Cricket Advisory Committee (CAC) - comprising of Kapil Dev, Anshuman Gaekwad, and Shantha Rangaswamy - had said that Shastri was the perfect candidate for the coaching job as he knew the team well.

After being re-appointed coach, Shastri said: "First, I would like to thank CAC Shantha, Kapil, and Anshu for having the faith in me to continue for another 26 months. It is a privilege and honour to be a part of the Indian team setup". (ANI)