Union Minister K J Alphons Monday slammed the Kerala government for turning the Sabarimala Temple complex into a "war zone" and lack of facilities at the shrine.

Sabarimala: Union Minister K J Alphons Monday slammed the Kerala government for turning the Sabarimala Temple complex into a "war zone" and lack of facilities at the shrine even as police detained 68 people from the complex in the early hours for holding protests.

Protests are being held across Kerala against the detention of the 68 persons even as the BJP demanded a judicial probe into the police action.

A situation worse than emergency is happening here, the devotees are not allowed to go up. Section 144 is imposed for no reason. Devotees are not terrorists, why do they need 15000 policemen here? : KJ Alphons MoS Tourism on #SabarimalaTemple issue pic.twitter.com/sOHaC3dAXP

Police sources told PTI that 68 persons had been taken into preventive custody from the temple complex and brought to the Manniyar camp early this morning.Their details are being verified and their arrests have not been recorded yet.

Alphons, who arrived at Nilackal, the base camp, Monday morning, told reporters, "The state government has turned the temple complex into a war zone. The devotees are not militants, they are pilgrims."

"What was the need to declare Section 144 at Sabarimala," he asked. 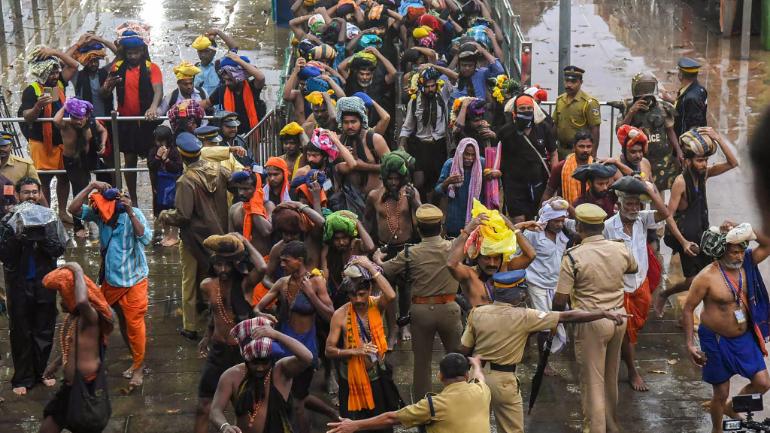 The minister said there was lack of basic facilities at the temple complex.

The union government had provided Rs 100 crore for putting up various facilities at Sabarimala, he said.

The minister's visit comes hours after the late night developments in Sabarimala when hundred-odd devotees held protests while chanting "nama japam" (chanting in the name of Lord Ayyappa) on Sunday.

The protest by devotees at the 'sannidhanam,' on the second day of the two-month long pilgrim season, resulted in police taking into custody 68 persons early Monday morning, the first such incident witnessed at Sabarimala. (PTI)

Women cops to be posted at Sabarimala: DGP