In a veiled jibe to the attackers in the incident, Maryam called them "cowards" and asked those responsible for it to come to the public.

"Don't attack under the veil. Nawaz Sharif will not get afraid of such a cowardly act. Lions do not fear jackals. Those who get defeats use such tactics. People will avenge those who are behind this act by voting in favour of Nawaz Sharif in the general election," she asserted.

While addressing a rally in Rawalpindi, Sharif's daughter removed the bullet-proof screen from the stage and challenged the crowd to "attack her if they have courage".

She then lambasted at Pakistan Tehreek-e-Insaf (PTI) chairman Imran Khan, alleging that he had been promoting a culture of intolerance in the society and use of foul language in politics, The Dawn reported.

"Do you think, just one message of condemnation (of the shoe-hurling incident) is enough? You (Imran Khan) promoted the culture of abusive language over the last five years in sit-ins and public meetings. Haven't you talked about dragging opponents by their neck from Prime Minister House?" she asked.

Maryam also criticised the Joint Investigation Team (JIT) on the handling of the Panama Papers case and said that it found "nothing despite spending millions of Pakistani rupees".

"The JIT head gave millions of rupees to his (Imran's) relatives in the name of investigations," she alleged.

A miscreant hurled a shoe at Sharif when he was about to address a gathering at the Jamia Naeemia mosque in Lahore on Sunday. 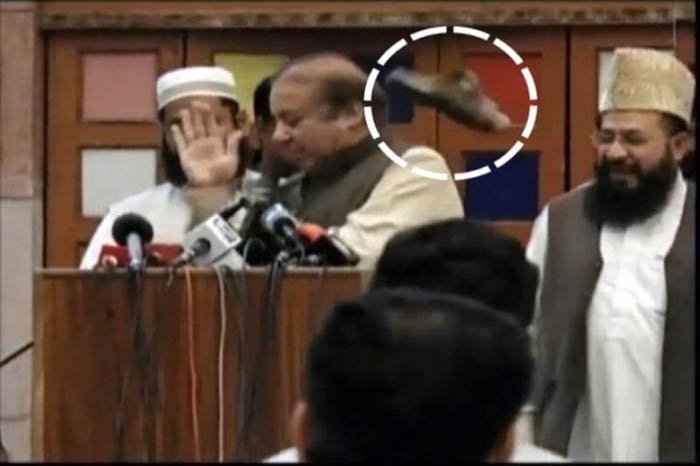 Sharif went to the mosque marking the death anniversary of a cleric Mufti Mohammad Hussain Naeemi.

This incident has added to the series of such attacks targeting various leaders across Pakistan in the recent days.

However, Sharif went ahead with his address, although reportedly shortening his speech, only to thank the organisers and saying words of prayer for the deceased cleric. The accused was caught and later thrashed by the audience before handing him to the security agencies present at the venue.

Earlier on Saturday, a miscreant smeared ink on the face of Pakistan Foreign Minister Khawaja Asif at a Pakistan Muslim League-Nawaz (PML-N) convention.

Prior to that on February 24, Interior and Minister for Planning, Development, and Reforms, Ahsan Iqbal was also attacked by a shoe while delivering a public address. (ANI)