Traffic restrictions in place ahead of Arvind Kejriwal's oath ceremony

The Delhi Traffic Police on Saturday issued an advisory a day ahead of the swearing-in ceremony of Chief Minister-designate Arvind Kejriwal at Ramlila Maidan.

New Delhi: The Delhi Traffic Police on Saturday issued an advisory a day ahead of the swearing-in ceremony of Chief Minister-designate Arvind Kejriwal at Ramlila Maidan.

The restrictions will be in place in the Ramlila Maidan area from 8 am to 2 pm.

Also Read: No CM, political leaders from other states will be invited for Kejriwal's oath ceremony- Gopal Rai

"OB Vans shall be parked on the footpath of JLN marg, opposite Ram Mila Maidan beyond Gate no 2 up to Kamla Market," it said.

Entry of commercial vehicles and buses have been restricted in few places such as Rajghat Chowk and Delhi Gate Chowk towards Guru Nanak Chowk via JLN Marg. 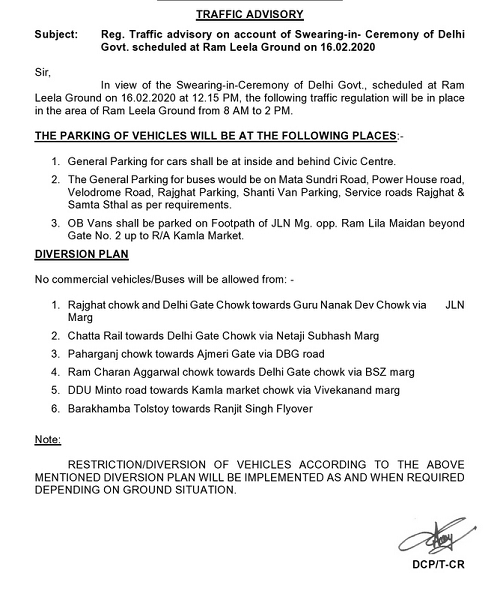 The Kejriwal-led party won the Delhi Assembly elections on Tuesday with a clear majority of 62 seats out of 70 with contender BJP bagging eight seats, better than its tally of three in 2015.

Arvind Kejriwal to take oath as Delhi CM on Feb 16

Defamation case against AAP leader adjourned till May 11