Train fire in Pakistan kills at least 65 after cooking accident

A fire swept through a Pakistani train on Thursday killing at least 65 people, police said, after a gas canister passengers were using to cook breakfast exploded.


Islamabad: A fire swept through a Pakistani train on Thursday killing at least 65 people, police said, after a gas canister passengers were using to cook breakfast exploded.

The fire destroyed three of the train’s carriages near the town of Rahim Yar Khan in the south of Punjab province. District police chief Amir Taimur Khan told Geo television that the death toll had gone up to 46.

“Two cooking stoves blew up. They were cooking, they had (cooking) oil which added fuel to fire,” Minister for Railways Sheikh Rashid Ahmed told Geo earlier.

“Most deaths occurred from people jumping off the train,” he added.

Baqir Husain, the head of the district rescue service, said the death toll could rise, and 15 people had been injured. 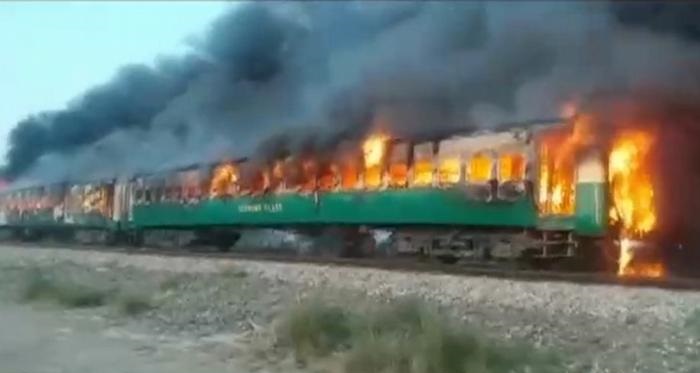 People sneaking stoves onto trains in order to prepare meals on long journeys is a common problem, the minister said.

Pakistan’s colonial-era railway network has fallen into disrepair in recent decades due to chronic under-investment and poor maintenance. Eleven people were killed in an accident in July and four in another accident in September.

About 130 people were killed in 2005 when a train rammed into another at a station in Sindh province, and a third train hit the wreckage.(Reuters)

4 killed, 3 injured in fire at ONGC plant in Navi Mumbai

UP: Three killed in road accident