" Communists have been wiped out from the world and the Congress from the country. We have almost two lakh new enrollments in the state. We are confident that we will form government in Tripura," Shah said.

Agartala: Bharatiya Janata Party president Amit Shah on Saturday said the next government in the state of Tripura would be that of the BJP.

" Communists have been wiped out from the world and the Congress from the country. We have almost two lakh new enrollments in the state. We are confident that we will form government in Tripura," Shah said at party organised meeting here.

Shah said Tripura has potential to become a model state of the country and pointed out various follies of the existing Manik Sarkar led government.

Highlighting the achievements of Prime Minister Narendra Modi he said, "The recent election results prove that after independence, Prime Minister Narendra Modi is India's most popular leader. Since Modi has come to power, the BJP has improved its condition in every poll results and in many places we have been able to form governments for the first time with a full majority. Even in the North- East, we have governments in Assam, Arunachal Pradesh, Manipur and a partnership in Nagaland." 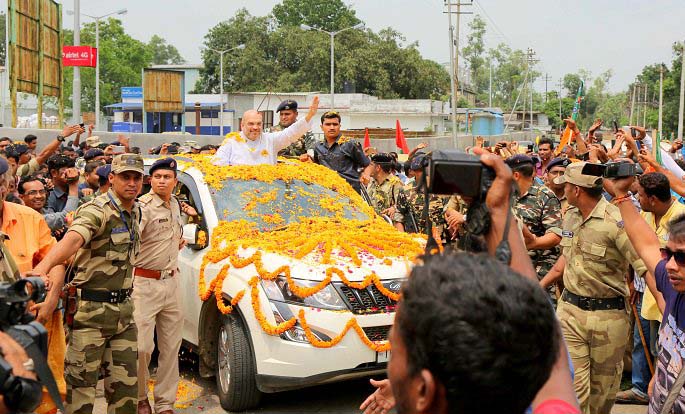 He further added that because of the work of the BJP and NDA government, the party is gaining consolidated support from across the country.

"The BJP believes in a model of development where there is no disparity between rural and urban India. All the different schemes of the government like Ujwala Yojana, Jan Dhan Yojana and Mudra bank Yojana has uplifted the downtrodden sections of the country," he said.

He also enlisted various development programs that the BJP government has taken up for Tripura.

The BJP president is on a two day visit to the state as part of his ' Parivartan Yatra' to strengthen the party across the country. (ANI)

It is Congress which has destroyed Constitution, says Amit Shah