Defence Minister Rajnath Singh on Thursday in the homemade light combat aircraft (LCA) Tejas that took off from the Hindustan Aeronautics Limited airport here this morning.

He became the first-ever Defence Minister to fly in the fighter jet.

Singh was accompanied by Air Vice Marshal N Tiwari. The Defence Minister who donned a white helmet waved to onlookers after he took his seat in the back in the twin- seater version of the aircraft before it took off. 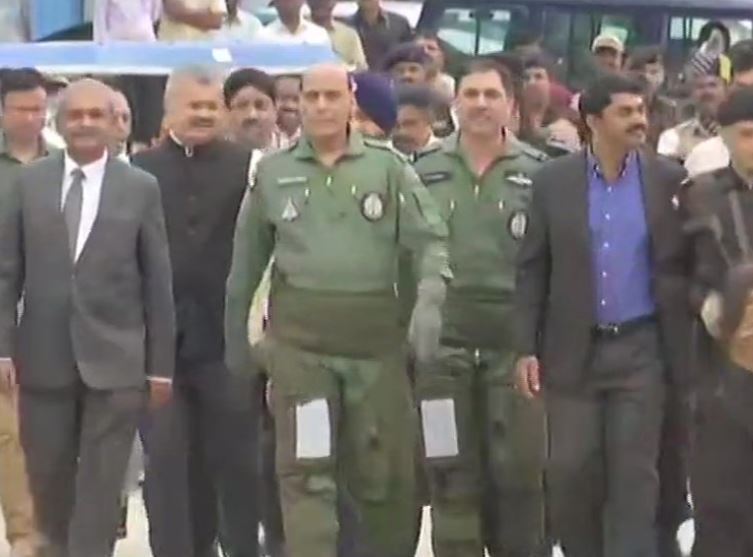 Ahead of the flight today, Singh tweeted two pictures of him dressed in a green flight suit. "All Set For The Day!" he posted. The Tejas is an Indian single-engine, delta wing, multirole light fighter designed by the Aeronautical Development Agency (ADA) and Hindustan Aeronautics Limited (HAL) for the Indian Air Force and Indian Navy.

It came from the Light Combat Aircraft (LCA) programme, which began in the 1980s to replace India's ageing MiG-21 fighters. In 2003, the LCA was officially named "Tejas". (ANI)

Rajnath after flying Tejas: I was thrilled, it was a special experience

Now we do not hesitate to cross border to protect India against terrorism: Rajnath

People of PoK will demand to be part of India, says Rajnath Singh